Hello Sweeties and Happy Saturday!!! Welcome to my Blog Tour Stop for Hunted by the Sky by Tanaz Bhathena. Due to personal reasons, my review and favorite quotes for this book will be posted sometime later. For now, enjoy this spotlight, an excerpt, and join the Summer Hunt Book Promotion (details below). Also, don’t forget to follow and check out the rest of the Blog Tour Stops!

Gul has spent her life running. She has a star-shaped birthmark on her arm, and in the kingdom of Ambar, girls with such birthmarks have been disappearing for years. Gul’s mark is what caused her parents’ murder at the hand of King Lohar’s ruthless soldiers and forced her into hiding to protect her own life. So when a group of rebel women called the Sisters of the Golden Lotus rescue her, take her in, and train her in warrior magic, Gul wants only one thing: revenge.

Cavas lives in the tenements, and he’s just about ready to sign his life over to the king’s army. His father is terminally ill, and Cavas will do anything to save him. But sparks fly when he meets a mysterious girl–Gul–in the capital’s bazaar, and as the chemistry between them undeniably grows, he becomes entangled in a mission of vengeance–and discovers a magic he never expected to find.

Dangerous circumstances have brought Gul and Cavas together at the king’s domain in Ambar Fort . . . a world with secrets deadlier than their own. Exploring identity, class struggles, and high-stakes romance, Hunted by the Sky is a gripping adventure set in a world inspired by medieval India. 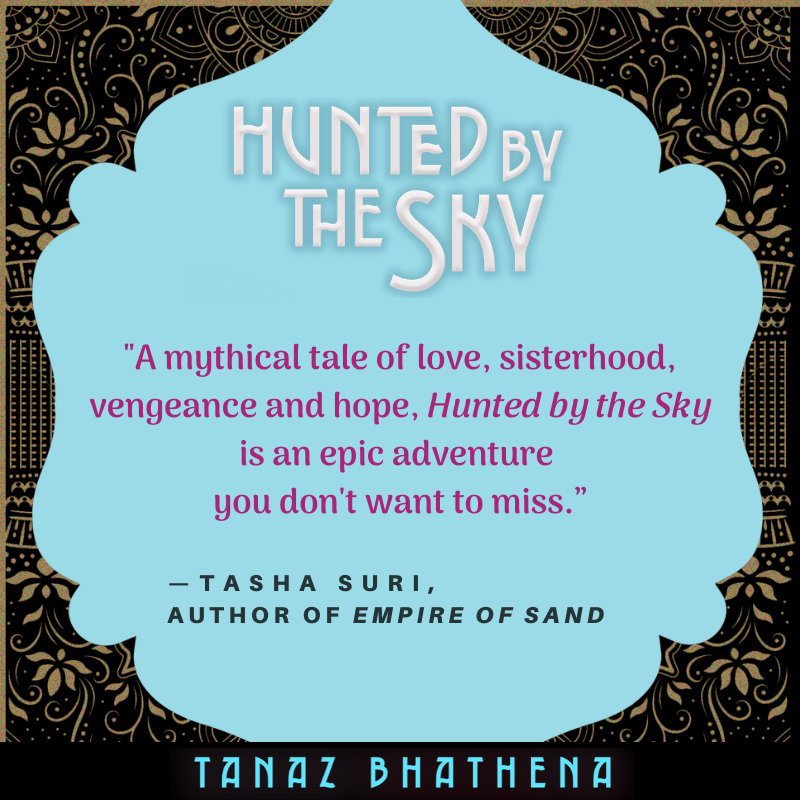 Tiles, cool under my feet. Swirls of sangemarmar overhead, interlocking in an archway made of shimmering rose-colored stone and stained glass. If I were another girl, I might be standing there staring at everything in awe. Only I’m not another girl. I’m an impostor inside Rani Mahal, following in the footsteps of a queen who may very well cut short what’s left of my life in this gleaming white courtyard. Balconies border us on all sides. A few women stand there, peering at us, their
whispers like leaves rustling in the silence.

It’s not until we cross the entire length of the yard and enter the building that I begin breathing again. A pair of serving girls dressed in the same outfit I’m wearing, only better fitting, bow for Queen Amba. One dares to glance at me, an eyebrow raised at my sweaty face and dirty clothes.

“Don’t loiter,” Queen Amba says, as if sensing my hesitation. Or maybe she has eyes in the back of her head. Though she says nothing else, I’m sure she hears the whispers that break out behind us. I follow her farther into the palace, down a long passageway lit by fanas after jewel-toned fanas. The air here smells of frankincense and oil, the sort used in temples to light wick-lamps for the gods.

A sharp left and we enter another passage, the sun pouring in from the glass panes overhead. At the end is a door, inlaid with firestones and pearls, and it is flanked by a pair of armed Sky Warriors, both women. My fingers curl inward as I catch a glimpse of their atashbans, sharpened to glistening points.

The door opens to a spacious chamber flooded with natural light. My jootis sink into cloud-soft carpets, patterned with paisley and Ambari wild roses. The design echoes on the walls, paint foiled into shimmering greens and yellows. A gilded chandelier hangs over a seating area corralled with mattresses and long, velvet-covered pillows.

“This is the gold room,” the queen says, and all of a sudden, I find myself under the scrutiny of that yellow gaze. “But you would already know that if you worked for me.”

“I beg your forgiveness, Rani Amba, but I am new here.”

I avoid looking directly into the queen’s eyes and focus somewhere around the region of her chin, where two full moons are tattooed: one blue, one gold. It’s said that only the direct descendants of the moon goddess, Sunheri, are allowed such tattoos—though I’m not certain how these descendants have verified their bloodline and connection to a now nonexistent goddess. The moons are so perfectly etched onto Queen Amba’s skin that to anyone not looking closely, the tattoos simply blend in with the hoop of her nose ring and elaborate choker—firestones and pearls embedded in a lattice of gold. She raises her hands in a pair of resounding claps. Within a space of two breaths, another serving girl appears.

“Are we expecting any new girls?” the queen asks.

The girl shoots me a sideways glance. “Yes, Rani Amba. We were expecting someone new today. To replace Siya.”

“One Siya to replace another. Interesting.” A finger tilts my chin up, forcing me to meet that yellow gaze. “What you did outside with that shield spell? That was clever,” the queen says coolly. “Who taught you?”

Pain, not unlike the slice of a knife, burns across my left side. I bite back a scream. There’s a cruel, knowing look on the queen’s face, even though she touches me with nothing other than a finger.

“With a touch, I can enter the recesses of your wretched mind and penetrate its every curve and bend. With a touch, I can make your eyes water, your eardrums burst, turn your organs into tar. I am going to say this only once: Don’t lie to me.”

A truth seeker. It’s the first time I’ve come across one other than Kali. Only Kali never wielded her power like this.

The truth. I’m suddenly immensely grateful for Amira’s refusal to give me any kind of instruction or help during our training.

The smallest of frowns mars the smooth perfection that is Queen Amba’s forehead. “And your mother. What happened to her?”

“She’s dead.” Give them the truth, but never the whole truth, Juhi always said when training us to answer suspicious thanedars. I think of my mother’s eyes, golden in the moonlight, the life in them suddenly extinguished in a flash of red. “She died two months before my fourteenth birthday.”

I wait for another jab in the belly, a nosebleed, something worse. But what I feel is weight: an invisible rock threatening to crush my ribs, a sensation I’ve always associated with grief. The queen’s hand drops back to her side. Breath rushes into my lungs. Weakness is not always a terrible thing, Cavas said. And it’s only now that I understand why.

“Open the bundle you brought in,” she says.

“Open it. Unless you have something to hide.”

I swallow hard, undoing the knot, allowing the cloth—an old gray sari—to fall to the sides. The bangles on Queen Amba’s wrist click together delicately, pausing inches from the contents. Her nose wrinkles, as if presented with dung cakes and not a stack of day-old bajra roti.

When she looks up at me again, I hope I appear sufficiently embarrassed about my poverty. I hope it is enough to evade another interrogation—one that very well might lead to other secrets being brought out in the open. Like where my daggers are hidden right now. Like my murderous plans for Raja Lohar.

“This must be your lucky day, Siya. I am not going to punish you for using magic against a royal.” I don’t miss the slight emphasis on my pretend name. Or the warning that rattles somewhere inside my rib cage, along with my heart. The queen’s mouth curves up into a shape that would, on any other woman, be a smile.

“Show this girl her quarters,” she tells the serving girl. “And get her a ghagra and choli that fit.”

Excerpted from Hunted by the Sky, copyright 2020 by Tanaz Bhathena.

Tanaz Bhathena writes books for young adults. Her sophomore novel, The Beauty of the Moment, won the Nautilus Award for Young Adult Fiction and has also been nominated for the Ontario Library Association’s White Pine Award. Her acclaimed debut, A Girl Like That, was named a Best Book of the Year by numerous outlets including The Globe and Mail, Seventeen, and The Times of India. Her latest book, Hunted by the Sky, (releasing June 23 2020) is the first of a YA fantasy duology set in a world inspired by medieval India. Her short stories have appeared in various publications including The Hindu, Blackbird, Witness, and Room.

Born in India and raised in Saudi Arabia and Canada, Tanaz lives in Mississauga, Ontario, with her family.

Kait Plus Books
Bookishaestha
Indie and Diverse
Diary Of A Bookgirl
Books.Bags.Burgers.

Orders of a hardcover book will receive limited edition swag and be entered to win a $100 gift card. Open to residents of US and Canada.

Prize: Win a copy of HUNTED BY THE SKY by Tanaz Bhathena (US/CAN Only)

Thanks for stopping by lovelies! Hope you have a wonderful weekend and don’t forget to follow the rest of the tour. Take care sweeties.

Hello Lovelies and Happy Monday. Welcome to my Blog Tour Stop for The Kinder Poison by Natalie Mae. My review for this book will be posted later on, so for now, enjoy this spotlight! Don’t forget to follow and check out the rest of the Blog Tour Stops!

Perfect for fans of Victoria Aveyard and Holly Black, this enthralling fantasy adventure follows a teenage girl chosen to be the human sacrifice in a deadly game between three heirs who will do anything for the crown.

Zahru has long dreamed of leaving the kingdom of Orkena and having the kinds of adventures she’s only ever heard about in stories. But as a lowly Whisperer, her power to commune with animals means that her place is serving in the royal stables until the day her magic runs dry.

All that changes when the ailing ruler invokes the Crossing: a death-defying race across the desert, in which the first of his heirs to finish—and take the life of a human sacrifice at the journey’s end—will ascend to the throne and be granted unparalleled abilities.

With all of the kingdom abuzz, Zahru leaps at the chance to change her fate if just for a night by sneaking into the palace for a taste of the revelry. But the minor indiscretion turns into a deadly mistake when she gets caught up in a feud between the heirs and is forced to become the Crossing’s human sacrifice. Zahru is left with only one hope for survival: somehow figuring out how to overcome the most dangerous people in the world.

Natalie Mae is an ex-programmer, dessert enthusiast, and author of young adult novels. She has also been a freelance editor and Pitch Wars mentor, and feels it notable to mention she once held a job where she had to feed spiders.

She now writes full-time at home with a bag of dark chocolates in one hand and a leopard cat on her lap. She is most definitely not checking Instagram right now.

Thanks for stopping by! Don’t forget to follow the rest of the tour. Take care sweeties.