No king. No rules.

England, 1191. King Richard is half a world away, fighting for God and his own ambition. Back home, his country languishes, bankrupt and on the verge of anarchy. People with power are running unchecked. People without are growing angry. And in the shire of Nottingham, the sheriff seems intent on doing nothing about it.

As the leaves turn gold in the Sherwood Forest, the lives of six people—Arable, a servant girl with a secret, Robin and William, soldiers running from their pasts, Marion, a noblewoman working for change, Guy of Gisbourne, Nottingham’s beleaguered guard captain, and Elena Gamwell, a brash, ambitious thief—become intertwined.

And a strange story begins to spread . . .

Both a gripping historical epic and fascinating deconstruction of the Robin Hood legend, Nathan Makaryk’s Nottingham mixes history and myth into a complex study of power—one that twists and turns far beyond the traditional tale of Sherwood Forest’s iconic thief.

NOTTINGHAM is based on Nathan’s critically-acclaimed stage play, “THE LEGEND OF ROBIN HOOD“

Intriguing at first, but not really the book for me… DNF

Nottingham by Nathan Makaryk intrigued me at first, but I just could not finish the book. I’m definitely not faulting the book or author. There are some really fascinating moments in the story.. at least from what I’ve read so far, but in the end this is just not the book for me.

I was excited to read this book, but when I got my copy, I felt overwhelmed. The book is long… very long and the writing is quite small. It really bothers me when the font size is tiny cause for me, that makes reading the book not very enjoyable at all. If the story is really addictive and entertaining, I probably would have kept reading and try to get over the print size, but this book moved a bit slow for me. It’s rich in details and descriptions and I think the story/plot is well-written, but the magic wasn’t there for me. I just didn’t feel as into it like I thought I would and sadly, I was never fully invested in the story to finish it.

I don’t like to DNF books and I have waited a while to write this review, but I don’t think I’ll pick this up again this year or any time soon. There are a few things that bothered me in terms of language and that kind of turned me off. I can’t say if the story gets better later on, but I hope it does. I think the story has a lot of potential, but it’s just not the right book for me… not now at this moment and maybe not ever. I do think the characters are wonderful and I enjoyed getting to know them for a while. There’s some fun bantering and dialogue too.

This may not have been my cup of tea, but I think there are other readers who will enjoy this story.

I received an advance reader copy of this book from Bookish First in exchange for a fair and honest review. All thought, feelings, and opinions are my own.

Nathan’s debut novel NOTTINGHAM will be published in August 2019 by Tor/Forge (US) and Bantam (AUS), with a sequel to follow in 2020.

Nathan is a theater owner, playwright, director, actor and improv comedian, living in southern California. None of these pay very well, so he also has a real job teaching audio systems networking software to people who have no idea he’s also a novelist and theater guy.

He likes dogs and scotch because of course he does.

Thanks for stopping by loves and have a fantastic day!!

Hello Lovelies and Happy Friday! I’ll be sharing this stunning COVER REVEAL for the Kingdom of Mirrors and Roses – A Limited Edition of Beauty and the Beast Retellings. 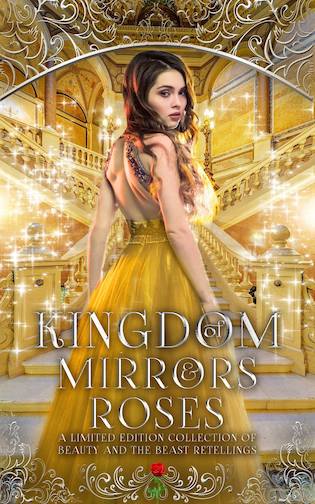 Beauty and the Beast, but not how you remember it

Deep in the forest, a castle hides. No one knows who lives there, but rumors of a beast keep people away.

Cloaked in shadows, hidden from view, a prince destroyed by a curse shuts himself away from the world, ashamed of the beast he’s become.

And in the village, a beautiful girl with her nose in a book, yearns for something more.

Find out if love really can defy all odds in this set of thirteen captivating retellings of the classic fairytale, filled with love, hope and the strength of two people willing to do whatever it takes…

Other books in the Kingdom of series…

Kingdom of Mirrors and Roses (Beauty and the Beast retellings)