Hi Lovelies! Welcome to my first Blog Tour of 2018. This stop is for the Pretty Dead Girls Tour hosted by Chapter by Chapter. I really enjoyed this YA murder mystery and definitely recommend it if you’re a fan of thrillers.  Don’t forget to stay until the end to join an awesome giveaway!

In the peaceful seaside town of Cape Bonita, wicked secrets and lies are hidden just beneath the surface. But all it takes is one tragedy for them to be exposed.

The most popular girls in school are turning up dead, and Penelope Malone is terrified she’s next. All the victims so far have been linked to Penelope—and to a boy from her physics class. The one she’s never really noticed before, with the rumored dark past and a brooding stare that cuts right through her.

Everyone has secrets, and theirs might get them killed.

Another terrific book from Entangled Teen! With great writing and a fascinating storyline, Pretty Dead Girls by Monica Murphy had me hooked from the very first page. It’s entertaining, addictive, and just so much fun.

This book completely intrigued me the entire time. The plot was fast-paced, suspenseful, and utterly thrilling that I actually finished reading in less than 12 hours. With catty popular girls, gruesome deaths, and a budding romance between two unlikely characters, there was definitely enough drama that had me turning the pages. I LOVED the mystery aspect and while Murphy certainly kept me guessing until the end, I did have my theories and 2 suspects in mind. There was a part that made me think it was a certain character. Just something about the scene gave me the feeling and I’ll have you know… I was correct! I loved playing detective and had such a blast solving the mystery. Although if I’m going to be honest, I never could do this in real life. I’d be too anxious, scared, nervous, and just a total mess.I do have to mention that the ending felt just a tad bit rushed. Don’t get me wrong, it was still awesome, but I felt like there could have been more.

The characters, while infuriating  and not very likable, were developed and written very well. They were fantastic in their own ways and acted their part quite convincingly. However, I have to admit that I had a difficult time relating with any of them – even Penelope. Their personalities were just strong and so intimidating that I could not see myself being friends with them. (I’m an introvert and very shy so I would not do well in their group). Nevertheless, that didn’t stop me from rooting for Penelope and the rest of her friends to have some kind happy ending.

Oh and can I just say that Cass’s grandmother was just precious!!! She’s super adorable, genuine, and so sweet. Yup she’s definitely my favorite character!

The romance, while interesting, was kind of weird and I still don’t really know how I feel about it. I’m a romance junkie so to feel this way about a love story — specially one of my favorite tropes — is really throwing me off.  I just felt that the relationship between Cass and Penelope was a bit forced at times and just so awkward. I think the story would have been just as good without their romance. BUT… there were a few moments between Cass and Penelope that made me swoon. My favorite scene involved a closet, some music, and one steamy spine-tingling kiss that I wished would have happened to me when I was a teen (minus the uncomfortable situation which you’ll find out once you read this book). Maybe if some of their interactions played out differently, their pairing would have been more believable.

Pretty Dead Girls by Monica Murphy is a fun thriller that’s perfect for anyone looking for a quick and exciting read. There’s plenty of drama and action, suspense to keep you on edge, and murder mysteries to solve. I thoroughly enjoyed reading this story and appreciated that Murphy addressed and showed the scary and devastating effects of bullying.

Monica Murphy is the New York Times, USA Today and #1 international bestselling author of the One Week Girlfriend series, the Billionaire Bachelors and The Rules series. Her books have been translated in almost a dozen languages and has sold over one million copies worldwide. She is a traditionally published author with Bantam/Random House and Harper Collins/Avon, as well as an independently published author. She writes new adult, young adult and contemporary romance. She is also USA Today bestselling romance author Karen Erickson. She is a wife and a mother of three who lives with her family in central California on fourteen acres in the middle of nowhere, along with their one dog and too many cats. A self-confessed workaholic, when she’s not writing, she’s reading or hanging out with her husband and kids. She’s a firm believer in happy endings, though she will admit to putting her characters through many angst-filled moments before they finally get that hard won HEA.

Thanks for stopping by and reading my review. Hope you lovelies get to meet these Pretty Dead Girls and have fun solving the mystery. Don’t forget to leave your comments down below! 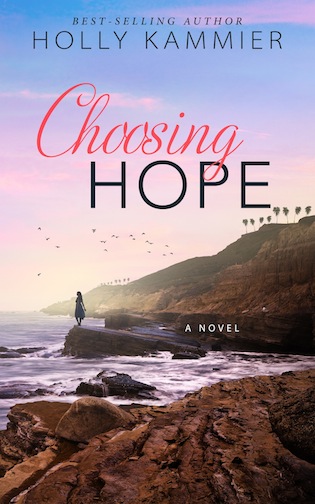 Choosing Hope is a harrowing story of passion and deceit, the things we do for love and the rabbit holes we tumble into chasing elusive fairy-tale endings. Dark around the edges with a shocking twist I didn’t see coming, this is the kind of book you’ll be passing around to your friends so you can talk about it. Holly Kammier delivers romance, suspense, and a strong, smart heroine who turns out to be nobody’s victim. Don’t miss this one! – Kat Ross, best-selling author of The Midnight Sea

A lie that changes it all…

Hope Rains Sullivan is living the dream—a successful husband, two beautiful young boys, and a charming home in Northern California. She should be happy. She almost convinced herself she was, until Adrian came along.

Adrian, appears to be everything her husband isn’t. He works with his hands, and is even willing to use them in a fight. He’s sexy, strong and fit, with warm brown skin that alludes to his Spanish background. Best of all, he lives for spending time with his kids. Feeling alone in her marriage, Adrian offers her a way out

Hope’s affair is just the beginning. Her journey inward will require untangling her complicated past and surviving an astonishing revelation. Her lover is not who he pretends to be.

She’s searching for her happily-ever-after, and no matter how painful the journey, she’ll find what she’s been looking for all along—the chance to choose Hope.

I held my breath for a beat and tilted my head to press my lips against his. Our mouths parted, fitting softly together at first, until he kissed me harder.

He tasted so good, my body pushed closer. Our lips knew each other. I moved on top of his lap, my legs on either side. His warmth, his crisp citrus scent. This was what kissing someone should feel like.

Hormones, pheromones, love, whatever it was, washed over me. I needed this man. I wanted to feel this way every hour of every single day.

My hand found its way up the back of his shirt. His skin ran hot. The ocean roared. I heard voices talking low, a couple walking by us.

His hand pressed into the small of my back. His other hand grabbed at the nape of my neck. He whispered, “I love you, Hope.”

I froze. He tried to kiss to me again. He couldn’t, not with my lower lip firmly entrenched in my teeth. I bit down with such force, I worried I’d draw blood. Why was he doing this to me? Why was I allowing it to happen?

His amber-green eyes looked into mine.

Tears pooled against my lashes.

Co-owner of Acorn Publishing, Holly Kammier is a UCLA honors graduate and an accomplished content editor. With a background in journalism, she has worked everywhere from CNN in Washington, D.C. and KCOP-TV in Los Angeles, to the NBC affiliate in small-town Medford, Oregon.

Holly is the best-selling author of the novel, Kingston Court, and Could Have Been Hollywood, a memoir. She recently completed her third book, Choosing Hope, a spin-off from Kingston Court. Choosing Hope is a harrowing story of passion and deceit, and the things we do for love.

Holly resides in her hometown of San Diego, California, close to family and friends. A world traveler in her younger years, these days when she isn’t writing or working with new authors, she spends much of her time hanging out with her two boys, Josh and Alex. Holly is an avid reader with a passion for timeless books and beautiful writing. She also enjoys long walks with her Jack Russell Terrier, romantic movies, and making her mischievous sons smile wider.