Hello fellow bookaholics! I am so thrilled to share the COVER REVEAL for S.E. Anderson’s upcoming book, CELESTIAL, the 4th book in the Starstruck Saga. If you’ve been following me for a while, then you already know how much I love this series. And if you don’t, then you’re in for a TREAT because these books are fantastically creative, out of this world amazing, laugh out loud hilarious, and wonderfully addictive. It’s one of the best adventures you’ll ever have, so strap on your seat belts and get ready to be dazzled beyond belief.

Sally Weber could barely look at herself… Now, she’s looking after the whole planet. – Starstruck

First rule of interstellar travel. Don’t get lost without your alien. – Alienation

It’s all fun and games until you crash into a planet. – Traveler

Are you ready for this epic cover reveal?!?!?

The cover for Traveler is still my FAVORITE, but this is absolutely stunning! The book covers for this series are always so gorgeous.

Sally, Zander, and Blayde, accompanied by their new friend Nim, have only one request: no more bizarre distractions on their hunt for Earth.
But before their cells can complete a single jump, the team is shoved off course and crash into a dreary old temple. Worse yet, there seems to be some confusion over Sally’s face, as it looks exactly like that the local deity, Selena, goddess of the moon and omniscient absentee. Sally’s ticking every box on the ancient prophecies checklist.
Fresh off of her meds and riding the withdrawal, and Sally must choose between embracing the role of Goddess so as to protect the planet from mysterious Sky People, or being thrown in a Volcano. Not the best way to start a tropical vacation. It’s not going to be easy uniting warring factions, dealing with excitable whispering forests, or fighting both literal and figurative demons. Not to mention keeping up the appearance of divinity when all Sally wants is a nap.
Armed only with some high school improv’ classes and a basic knowledge of foreign pop songs, Sally must save the planet – before everything goes up in flames. 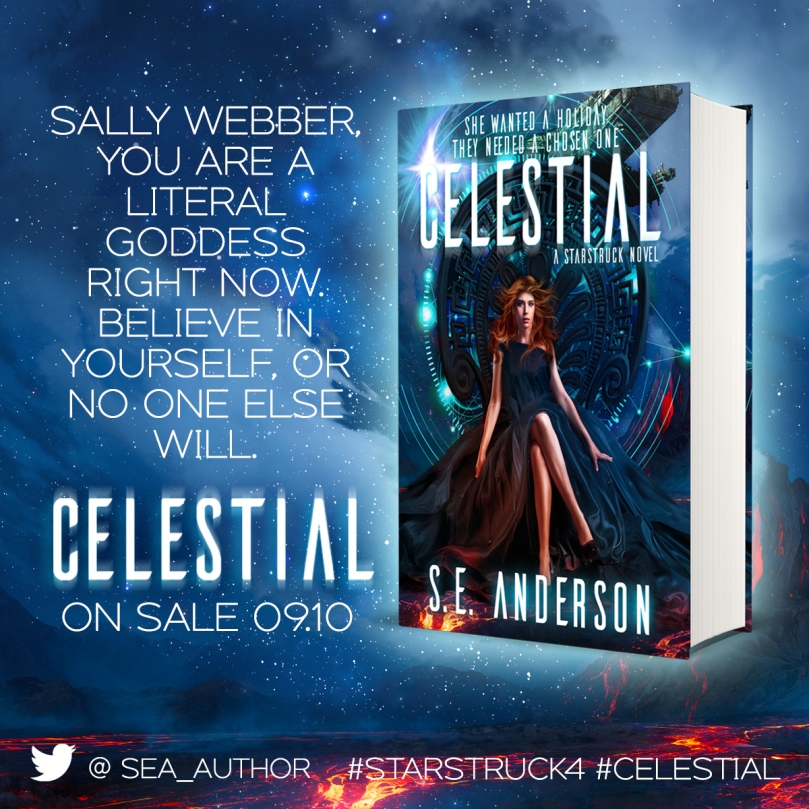 S.E. Anderson can’t ever tell you where she’s from. Not because she doesn’t want to, but because it inevitably leads to a confusing conversation where she goes over where she was born (England) where she grew up (France) and where her family is from (USA) and it tends to make things very complicated.

She’s lived pretty much her entire life in the South of France, except for a brief stint where she moved to Washington DC, or the eighty years she spent as a queen of Narnia before coming back home five minutes after she had left. Currently, she goes to university in Marseille, where she’s starting her masters of Astrophysics.

When she’s not writing, or trying to science, she’s either reading, designing, crafting, or attempting to speak with various woodland creatures in an attempt to get them to do household chores for her.  She could also be gaming, or pretending she’s not watching anything on Netflix.

I hope you love this cover as much as I do! Don’t forget to mark your calendars for the release and start binging this series right now!

One thought on “Cover Reveal – Celestial by S.E. Anderson”