Hello Lovelies and welcome to my Blog Tour stop for You Won’t See Me Coming by Kristen Orlando. Today I have a Playlist by the author to share with you. Hope you enjoy reading! Don’t forget to join the giveaway at the end and follow the rest of the tour. 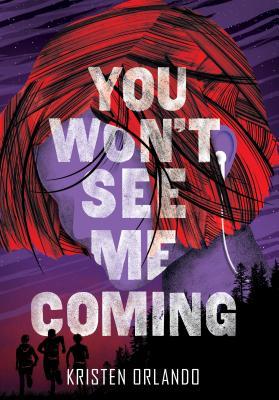 After finally taking down Torres, her mother’s merciless killer, Reagan and Luke have two targets on their backs and are forced into hiding. With new names, looks, and cover stories, they’re living quiet, “safe” lives, but revenge comes at a steep price. Reagan’s actions continue to haunt the pair and put the people they love in danger.

When Reagan discovers her best friend Harper is on the verge of being kidnapped, she and Luke defy Black Angel orders and risk blowing their cover to save their friend. After the rescue attempt goes wrong, the three friends must go on the run with an army of assassins hot on their trail and the list of trust-worthy Black Angels getting smaller and smaller. Will they make it out alive? And at what cost?

Fast-paced and suspenseful, this is the explosive finale of Kristen Orlando’s Black Angel Chronicles series.

I love this! I have a mix of songs that I think that

a) go perfectly with the theme of the book and

b) Reagan listens to or would be into.

So I clearly spend a lot of time daydreaming about these things. If the book was ever to be turned into a TV Show, this is what I’d want to be the theme song: The Pretender by Foo Fighters. Just go listen to it. It’s amazing.

Now if the book was ever made into a movie, I’d actually pick a different theme song: Hero by Skillet

Wouldn’t that make the most epic trailer song? I can see it all in my head whenever I listen to it. And yes…I do fantasize about these things. Every author does!

Burn it to the Ground by Nickleback

I’m sure I can’t be the only one who does this, but sometimes when I hear a song, I think about how it could fit into a movie or TV show version of something that I’ve written or even just imagined. I’ve been doing it my whole life! If YOU DON’T KNOW MY NAME was ever made into a TV show, I have the opening song and scene in my head. Harper, Luke, Malika and Reagan would each be listening to this song as they get ready for school at each of their respective homes. But of course as the other friends are packing their bags with books, applying makeup or packing a sports practice bag, Reagan is packing her secret weapons and getting all her spy stuff ready to go! The following song is totally what would be playing over that “getting ready for school” montage scene and then in the car as they drive together through New Albany, Ohio to school.

Times to Remember by Dead Sara

Listen to it and tell me that song wouldn’t be awesome. I think about this stuff way too much. A girl can dream, right?

I’m currently obsessed with this young singer/songwriter out of the UK (my 21-mont-old daughter Samantha requests her songs every time we play music) and I feel like Reagan and Harper would totally be into her and be singing along to her songs in the car:

I feel like Reagan would also be into the band Flyleaf. I particularly like this song for her:

Set Me on Fire by Flyleaf

Reagan has a very eclectic taste in music, so I think she’d be into a wide range of music. Below are songs that are either mentioned across all three of the books or I think would be on one of Reagan’s mixes.

Takin’ It to the Streets by Doobie Brothers

The Chain by Fleetwood Mac

That’s The Way by Led Zepplin

Gimme Shelter by The Rolling Stones

I Only Lie When I Love You by Royal Blood

Tokyo by The Wombats

Young Blood by The Naked and Famous

Anna Sun by Walk the Moon

This Head I Hold by Electric Guest

Beggin for a Thread by Banks

Classic by The Knocks

When You Find Me by Joshua Radin

Boardwalks by Little May

Dream in Blue by The Stray Birds

Writing is one of the great loves of Kristen Orlando’s life and she has been lucky enough to make it her living, first as a television producer, then as a marketer and now as a novelist. Kristen graduated with a B.A. in English literature from Kenyon College. She lives in Columbus, Ohio with the other great love of her life, Michael. You Don’t Know My Name is her debut novel.