Hello bookish friends! I have a gorgeous book cover reveal to share with you from the Sovereign Series by Josie Jaffrey. I hope you love it as much as I do!

Let’s check out the blurb first…

The price of freedom is always paid in blood

The sovereigns of the Silver have awakened, but the Queen is a fractured shell of the woman Cam remembers. He hopes to put her back together by finding her son, the missing prince. At least, that’s what he tells his friends when he leaves for the Red.

Back in the Blue, Julia’s old tormentor Rufus is hounding her at every turn. She’s sick of feeling powerless, but she has a plan that will bring the Nobles to their knees.

All she needs is blood.

Now scroll down for the cover reveal. 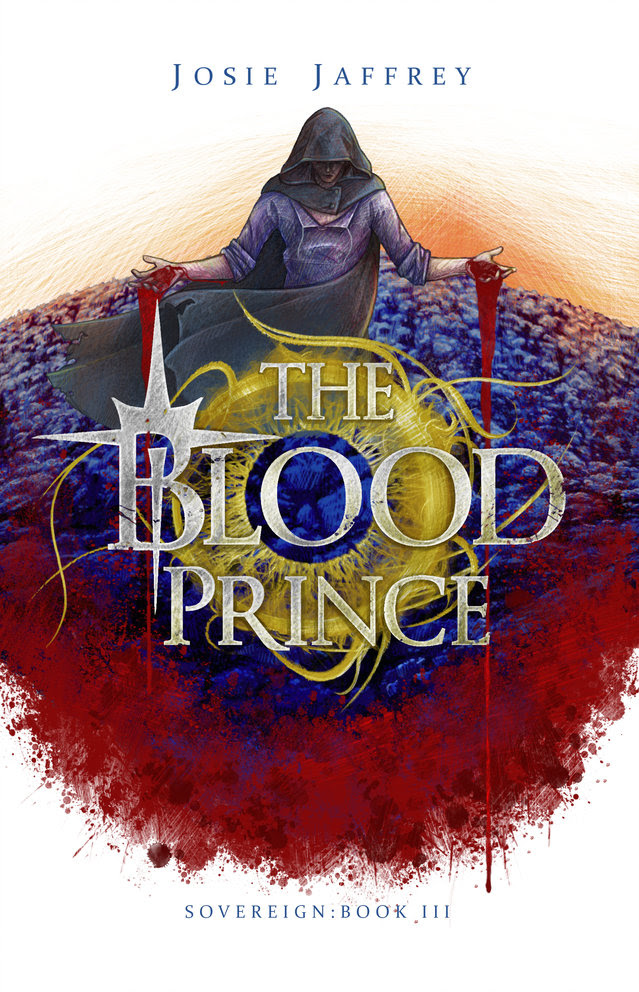 IN THE BLUE, THE WORLD’S LAST CITY, ALL IS NOT WELL.

JULIA IS STUCK WITHIN ITS WALLS. SHE SERVES THE NOBILITY FROM A DISTANCE UNTIL SHE MEETS LUCAS, A BOY WHO BELIEVES IN FAIRYTALES THAT JULIA’S WORLD CAN’T ACCOMMODATE. THE BLUE IS HER PRISON, NOT HER CASTLE, AND SHE’D ESCAPE INTO THE TREES IF SHE DIDN’T KNOW THAT CONTAMINATION AND DEATH AWAITED HUMANITY OUTSIDE.

BEYOND THE CITY’S BOUNDARIES, IN THE WILD FORESTS OF THE RED, CAMERON HAS PRECIOUS LITTLE HUMANITY LEFT TO LOSE. AS HE SEARCHES FOR A LOST QUEEN, HE FINDS AN ENEMY RISING THAT HE THOUGHT LONG DEAD. AN ENEMY THAT THE HUMANS HAVE FORGOTTEN HOW TO FIGHT.

ONE WAY OR ANOTHER, THE WALLS OF THE BLUE ARE COMING DOWN. THE ONLY QUESTION IS WHAT SIDE YOU’LL BE ON WHEN THEY DO.

If you enjoy stories that have twists and turns that bite, action and drama that satisfy, lies and betrayals that sting, and complex but fascinating characters that will steal your hearts, then this is the book for you. Oh and be prepared for one crazy ending. The betrayal in the end was totally unexpected. Never saw that one coming. Not even a little bit.

The last city on Earth is contaminated. Now blood is the only thing that can wash it clean.

Julia is trapped inside the Blue as the Nobles fight over the few humans who are still alive. When the dust settles and she finds herself shackled to a new master, she knows she must escape or die.

Meanwhile, Cam has gathered a handful of comrades and is on his way into the Red to rescue his queen. But not all of his friends can be trusted, and not all of them will make it back alive.

The Silver Queen is the second book in Josie Jaffrey’s Sovereign trilogy, set in a dystopian Europe where vampiric Nobles control the last remnants of the human race.

Josie lives in Oxford, England, with her husband and two cats. When she’s not writing, she works as a lawyer, specialising in intellectual property and commercial law. She also runs a video book review club, The Gin Book Club, through her website.

The Solis Invicti series (a prequel series to the Sovereign series) is available now.

Thanks for stopping by loves! Have a fantastic day!!!