Hello lovelies! Hope you had a wonderful weekend. Today, I have my review for Happily and Madly by Alexis Bass. 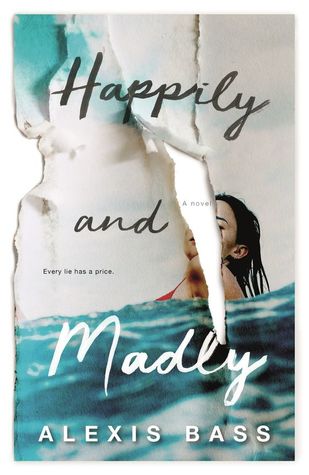 Maris Brown has been told two things about her destiny:

1. She will fall happily and madly in love.
2. She could be dead before she turns eighteen.

The summer before that fateful birthday, Maris is in the wealthy beach town of Cross Cove with her estranged father and his new family–and the infamous Duvals. Since the youngest member of the Duval family, Edison, is back from college and back in the arms of Maris’s new stepsister, her summer looks to be a long string of lazy days on the Duval’s lush beach.

But Edison is hiding something. And the more Maris learns about him, the more she’s given signs that she should stay as far away from him as possible. As wrong as it is, Maris is drawn to him. Around Edison, she feels truly alive and she’s not willing to give that up. Even if it means a collision course with destiny.

Not quite happily or madly satisfied, but it’s an interesting story

Happily and Madly by Alexis Bass didn’t make me madly in love with the story or happily satisfied with everything. I’m actually quite conflicted with this book. I was intrigued in the beginning and there are things I liked, but in the end it just wasn’t the book for me.

Maris Brown is not a character I would say I loved and could relate to, but she’s also not someone I dislike. In many ways, my heart broke for her and everything she’s been through and is still going through. On the other hand, I sometimes didn’t care about the consequences of her actions. I felt that she doesn’t try to avoid putting herself in situations that inevitable hurts her. I don’t want to go into her character development too much, but I was really frustrated with Maris that sometimes it took precedence over me feeling bad for her. I mean, I understood why she acted the way she did and I could feel her pain… I just wanted her to make different choices… better choices.

The other characters didn’t really impress me either. Although I thought Edison (Finn) was intriguing, I just didn’t like him that much. He’s mysterious and had this charm about him, but it just didn’t personally work for me. I liked Chelsea more than I thought I would, but I still felt uneasy about her. I liked that she tried to include Maris and it seemed like Chelsea really wanted to be close/friends with her step-sister. I just couldn’t quite understand her fascination with Edison, his family, and this picture perfect version of her happily ever after.

I didn’t like the romance aspect at all. It was flat, infuriating, and I felt no emotions. That’s most likely because I couldn’t connect with Maris or Edison and at the end, I just didn’t care about their relationship. If anything, I was quite annoyed.

Having said all that, I did enjoy the mystery, suspense and twists which kept me intrigued until the end. I thought the writing style was easy to read, the pacing was okay, and the plotline was engaging enough. And, even though it seemed a bit rushed, I did like the ending.

Overall, Happily and Madly was an interesting read. While some parts felt slow, the mystery part had me thinking and wanting to know what would happen next. It’s just a bit disappointing that I personally couldn’t connect with the story or characters. It may not have been a book for me, but I’m sure this would appeal to plenty of readers.

I received an advance reader copy of this book from the publisher via Netgalley. All thoughts and opinions are my own.

(Bio and photo taken from the author’s website/goodreads)

Alexis Bass grew up in Washington, went to college in Arizona, and spent her early twenties in Seattle. She currently lives in Northern California with her husband and a gorgeous and rambunctious golden retriever, Dylan McKay. She loves good fashion and good TV as much as a good book, and is a huge advocate of long beach vacations.

Her novels, LOVE & OTHER THEORIES and WHAT’S BROKEN BETWEEN US (HarperTeen), are available wherever books are sold.

She is repped by Suzie Townsend at New Leaf Literary & Media, Inc.

Thanks for stopping by loves!  Have you read this book? What did you think?

One thought on “ARC Review – Happily and Madly by Alexis Bass”