Happy Monday Lovelies! I hope you all had a wonderful and fun weekend. Today, I’ll be sharing my review for Death’s Kiss by Regie Khemvisay. If you love dysotpian stories, romance, mystery, and wicked twists and turns in books, then you have to add this book on your TBR! 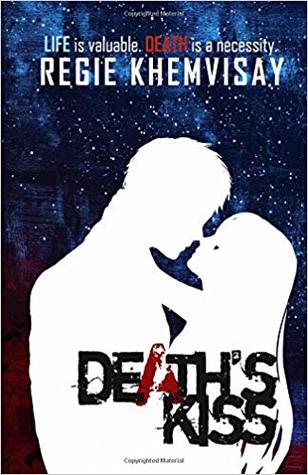 Life is valuable. Death is a necessity. In Yliria, this is not a contradiction.

New Year’s Eve 2054. A virus, later named the BlackJack, struck and killed 3/4 of the world’s population. Only those who were 21 and younger were not infected. Treaties broke off. Countries severed connection to the outside world. And the country of Yliria built its own invisible walls.

Thirty-eight years later…Yliria is now at peace. But nothing is gained without sacrifices.

Yuri’s life was perfect. Family. School. Career. Then there’s Ryoma. Her one true love. Nothing could go wrong when she has everything planned out. But on the night of their anniversary, it did not end with a kiss.

Ripped from their normal lives, both Yuri and Ryoma woke up from a dream to face the real nightmares. As a punishment for their parents’ treason, they must serve the government—the System—as the new Aces of the Court Department, assigned to oversee and maintain the peace and balance during the weekly shuffle.

One week. 13 lives. Armed, not with a weapon, but the same virus that destroyed the world. The Aces must escape their new fate. If not, the only path left in their future is the one covered in blood.

Death’s Kiss by Regie Khemvisay is so satisfylingly twisted, unpredictable and entertaining. It kept me reading late into the night, had me holding my breath at times, and definitely made me uneasy and emotional. It has a few weak spots, but the story as a whole is absolutely fascinating, suspenseful, and riveting.

In a world ravaged by a virus that wiped out 3/4 of the world’s population, every life is valuable. But, in order to save the lives of the many…death has become a necessity.

In this dark, edgy and gripping dystopian tale, two star-crossed lovers must serve the governement that tore them apart as punishment for their parents’ crimes. Yuri and Ryoma become part of the New Aces, a group assigned to protect the peace and balance in Yliria. Lost, angry, and confused, they both seek answers regarding their duties as Aces. But, when the truth includes death and blood, Yuri and Ryoma decide to fight back. With a small chance of survival and a battle they might not win, can Yuri and Ryoma save the people of Yliria and finally find a way to be together? Or will their sacrifices be in vain?

Khemvisay created such a disturbing, but utterly intriguing post-apocalyptic story that had me hooked from the start. I do have to admit that the beginning chapters does feel a bit choppy and there are a few awkward dialogues. Also, one of the characters has sudden temper tantrums and outburst that just seemed weird and offputting. Having said that, I thought the overall writing style is quite solid, atmospheric and engaging.

The world-building, while not entirely well-executed, is quite mesmeric. There are also a few similarities with other dystopian books, but this story is without a doubt unique and different enough to shine on its own. I won’t spoil it for you, but I thought the inspiration behind the creation of the Joker System is clever, imaginative, and original. It’s actually pretty awesome and I really liked that part of the the story.

Aside from a few slow chapters in the first half of the book, the plot moves quickly with plenty of shocking twists and turns that I never knew what to expect or who to really trust.  There’s action, intrigue, drama, mystery, betrayals and secrets… so many secrets that I found myself literally mouthing OMG a few times throughout the story. Khemvisay completely messed with my mind and kept me on my toes until the very last page.

The characters are far from perfect, but I liked how they all surprised me… sometimes more than once. I thought Khemvisay created genuinely flawed and realistic individuals who I grew to really care about and even admire. Even the secondary players and the villains affected me in some ways. In the end, they all made an emotional impact and a part of my heart ached for them.

The Aces (Yuri, Ryoma, Sam and Chrys) are fascinating characters and wonderful heroes. They have their own strengths, weaknesses, and quirks. They’re passionate, determined, brave and deep down, just really kindhearted people trying to do the right thing. I also really liked the group’s dynamic, bond, and friendship. Some of the lighthearted, sweet, and hilarious moments of story are when they’re together and I really loved getting to know them. I adored Chrys and his sense of humor and Sam is just so feisty and fun. They’re really great characters and I enjoyed seeing each of them grow into the type of heroes that could spark hope and inspire others to fight and protect the good.

It took some time, but in the end I really adored Yuri and Ryoma with all my heart. Yuri may be a bit impulsive, but I liked the fire in her. I liked that she’s willing to break rules and make sacrifices to protect the people she loves. Ryoma is gentle, patient, and loving. I didn’t always like when he would tease Yuri, but I could tell that he really cares and wants what’s best for her. They’re both quite frustrating and annoying sometimes, and definitely needed to grow up and mature, but I thought they’re such strong, complex, and admirable characters. They have been through so much pain, heartbreak, betrayal, and loss that it was really easy for me to root for them.

I liked the romance… there’s angst, swoon, heartache, chessy moments, and some really amazing sweets scenes. I really can’t say too much here without giving anything away, but my heart is really torn. I do wish that there’s a bit more background information about Yuri and Ryoma’s relationship. Khemvisay does go into, but I personally wanted more history about them.

Brimmed with the perfect dose of drama, intrigue, conflict, humor, romance and excitement, this book is a thrilling and emotional ride. I loved the nail-biting twist and turns, the shocking revelations and heartbreak, and all the tender and hilarious moments. I really hope there’s a sequel or two cause I would love to be back in Yliria cause that ending definitely left me wanting more.

Haunting, seductive, and suspenseful, Death’s Kiss by Regie Khemvisay is a fantastic debut novel perfect for fans of dystopian stories. It’s an intricately creative, thought-proving and deeply moving tale of courage, survival, forgiveness, love and the true meaning of sacrifice. I honestly can’t reccommend this book enought and Khemvisay is definitely an author to add on your list!

P.S. – Please, please, please let there be another book so I can have more scenes with ADAM!!!

I received a free copy of this book from the author in exchange for a fair and honest review. But, I loved this book so much I purchased my own e-copy, so I can read my favorite parts whereever I go. All thoughts and opinions are my own.

Thank you Regie Khemvisay for sharing this story and I really cannot wait to read whatever you write next!

Quotes may contain spoilers. Read at your own risk.

If these empty word cannot change the world, then we’ll just have to take action.

And if by any chance, you have forgotten, sir… sometimes pawns can take out the King.

Things do not happen exactly when we want them to. We have to wait for the right time and the right place, and then be ready for whatever comes tomorrow.

Life is a gamble-full of risks, stakes, and wagers — like what they say, you win some, and you lose some. We gamble to fight for what we believe in, or what makes us happy; we take a gamble every decision, hoping that they are the right choice.

You believed in something, and that’s what you were fighting for. Don’t let anyone tell you what your beliefs should be.

Your selfless love for Yuri deserved the immunity of the virus. They say that love destroys a person. Makes them selfish, stupid, and vulnerable. Of course, there is truth to that. But as for you, that selfless love is the sourse of your power. And that’s what you will use to presevere any evil.

Because the people of Yliria needs us, and if we do love each other, we’ll let go today so tomorrow, we can be together.

Choices were made. Risks were taken. And even for two people who loved beyond always, sacrifices had to be made that we could not selfishly take back.

Regie Khemvisay was born in the Philippines and immigrated to the United States at the age of 15 in Las Vegas, NV. She joined the Army in 2011 after high school and was stationed in Korea, California and Texas until she decided to end her contract in 2018. She currently resides in El Paso, TX while her husband is stationed in Fort Bliss with their one son. For seven years, she served in the military while pursuing a degree on Digital Media and Web Technology. She is currently taking up her Master’s in Illustration with Academy of Art University.

Death’s Kiss is her debut novel.

Thanks for stopping by and reading sweeties. I hope you are intrigued enough to pick up this book or add it on your TBR!