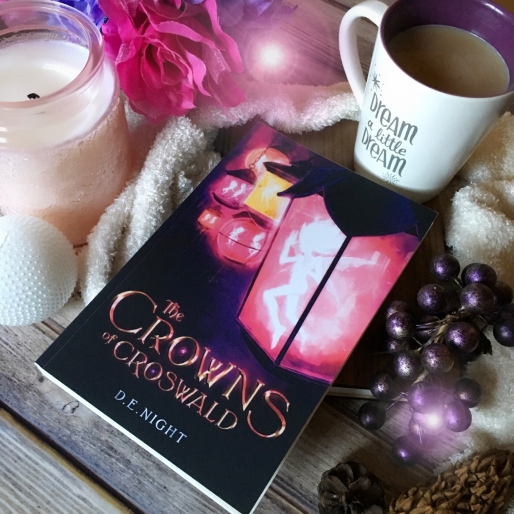 So I started The Crowns of Croswald yesterday (read only a few chapters) and I have to say… I’m really enjoying it. It’s unique, imaginative, and fascinating. My favorite so far has to be the scaldrons. I don’t want to give anything away, but those creatures are quite interesting. I’m really looking forward to reading some more tonight. I think I’m just about to be thrown into an amazing enchanting adventure.

This book will be available tomorrow, but if you want to get your hands on review copies (while supplies last), JKS Communications kindly provided this LINK where you can request.

Oh and there’s also an awesome book trailer you can watch here.

Last month, I was quite lucky with book giveaways. I haven’t won anything in over a year, so winning 6 times was such a nice surprise. The last giveaway I won was from Sourcebooks Fire through Instagram and my awesome prize includes the book, a drawstring bag, sticker, mini notebook and a few guitar picks.

Tessa Hart’s world feels very small. Confined to her bedroom with agoraphobia, her one escape is the online fandom for pop sensation Eric Thorn. When he tweets to his fans, it’s like his speaking directly to her…

Eric Thorn is frightened by his obsessive fans. They take their devotion way too far. It doesn’t help that his PR team keeps posting to encourage their fantasies.

When a fellow pop star is murdered at the hands of a fan, Eric knows he has to do something to shatter his online image fast—like take down one of his top Twitter followers. But Eric’s plan to troll @TessaHeartsEric unexpectedly evolves into an online relationship deeper than either could have imagined. And when the two arrange to meet IRL, what should have made for the world’s best episode of Catfish takes a deadly turn…

I don’t think I’ve ever been this excited to read a thriller/mystery book… Not that I read them often. But the blurb for Follow Me Back by A.V. Geiger surprisingly gave me the chills. I mean there’s a girl with agoraphobia crushing on a pop star, extreme fangirling, murder, internet trolling and an unexpected online romance between said girl and pop star. Pretty crazy right?! This book sounds so awesome already. Oh and the concept of telling the story through Tweets, DMs and police transcripts — so love that idea. I definitely can’t wait to read this and it’ll be really interesting to see how everything plays out especially since there’s a sequel.

Huge thanks to the author and the publisher Sourcebooks Fire for hosting the giveaway!