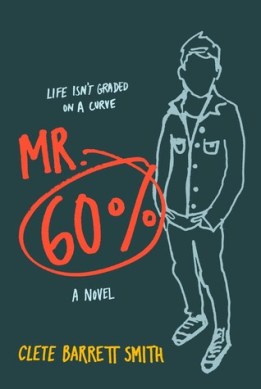 Matt Nolan is the high school drug dealer, deadbeat, and soon-to-be dropout according to everyone at his school. His vice principal is counting down the days until Mr. 60% (aka Matt) finally flunks out and is no longer his problem. What no one knows is the only reason Matt sells drugs is to take care of his uncle Jack, who is dying of cancer.

Meet Amanda. The overly cheerful social outcast whose optimism makes Matt want to hurl. Stuck as partners during an after-school club (mandatory for Matt), it’s only a matter of time until Amanda discovers Matt’s secret. But Amanda is used to dealing with heartbreak, and she’s determined to help Matt find a way to give life 100 percent.

I had such high expectations for this book. The title, Mr. 60%, was the first thing that got my attention. Then I read the premise – it sounded interesting, gritty, and heart-wrenching. I couldn’t wait to finally get into it and was seriously looking forward to “ALL THE FEELS.” Sadly… I ended up having a lot of mixed feelings. There were some good things about this book, but it just didn’t WOW me like I thought it would.

My main problem with this book is the characters. I had such a difficult time connecting with the characters. I like Amanda a lot in the beginning. She’s an outcast, but always so happy and bubbly. She doesn’t let anything or anyone stop her from doing what she loves. Even when she’s rejected and hurt, she still finds a way to keep going. I admired that about her. BUT halfway through… there was just something off about her. I can’t pinpoint what it was, but she came off maybe way too optimistic? I did like Matt but I just didn’t care all that much about him. I don’t know why… I mean I feel like I should. His life is such a big mess. Everyone thinks he won’t succeed. He has to resort to selling drugs just to keep up with bills and medical expenses. Then there’s his uncle, Jack, whose condition is never going to get better and you know the worst is coming at any moment. It’s completely depressing and I’m such an emotional person I should have felt “IT.” I can watch a show halfway through or know nothing about it, but when I see a heartbreaking situation where the characters are crying… I almost always will tear up. This type of stories hit me hard… BUT UGHHHHH this one didn’t.

The plot had potential.. a lot of it, but it just kind of felt flat for me. Cancer is a very sensitive issue. Like I said, I was hoping for that FEELS and barely got any. The writing was just okay for me. I did like that the book was easy to read. I breezed through it in less than 24 hours and couldn’t put it down. That’s a good thing… I think. Or maybe, I just kept going because I was looking for something more. It also felt like the storytelling was missing something. I don’t know… I’m honestly kicking myself right now because I can’t wrap my mind around why this book did not work for me. Oh and that ending…don’t even get me started. It felt rushed and unfinished. I thought there was an epilogue or something, but nope. It was seriously so frustrating.

As disappointing as this was for me, there were a few things I did really like – the relationships, the humor, and the title. I like Matt’s relationship with Jack and I thought it was really admirable what Matt was doing for his uncle. They bickered a lot, but you can tell how deeply they cared about each other. I also really like that Matt and Amanda stayed friends throughout the story. I’m usually all for romance and thought Matt and Amanda are just great for each other, but it’s nice to see boy-girl platonic relationships cause YES boys and girls do not always have to have romantic feelings for each other. Boys and girls can be best friends and just that. I also really enjoyed the sense of humor in this book. The bantering between Matt, Jack and Amanda was refreshing, amusing and endearing. That was definitely a big plus! And the title… I just really love the title. Matt is called “Mr. 60%” for a reason… it’s quite sad really, but I thought it was pretty clever.

Overall, I don’t dislike this book, but it definitely did not work for me. I think that Mr. 60% by Clete Barrett Smith is a decent story with the potential to be amazing and is probably that to other readers, but it just felt dull for me. Maybe I just went into this expecting to feel something and when I didn’t, I ended up being so disappointed that I couldn’t relate to the characters and story anymore. At least I didn’t DNF it and some parts were entertaining.

I received an advanced reader copy of this book from the publisher, Crown Books for Young Readers, via NetGalley in exchange for a fair review. All thoughts and opinions are my own.