Hello fellow swoonies and book lovers! Welcome to my Blog Tour stop for the second book in Anna Belfrage’s The Wanderer Series, Smoke in Her Eyes. This blog tour is hosted by TLC Book Tours and you can check out the rest of the stops down below. 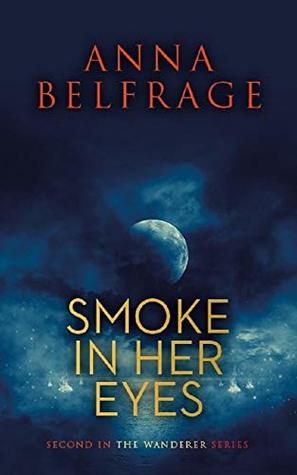 Six months ago, Helle Madsen would have described herself as normal. Now she no longer knows if that terms applies, not after her entire life has been turned upside down by the reappearance of not one, but two, men from her very, very distant past.

Helle Madsen never believed in mumbo-jumbo stuff like reincarnation—until she came face to face with Jason Morris, a man who purportedly had spent fifty lives looking for her. Coping with being reunited with the lover from her ancient past was one thing. Having Sam Woolf, her vindictive nemesis from that same ancient past join the party was a bit too much. Suddenly, Helle finds herself the reluctant heroine of a far-flung, time-transcending epic story, one in which pain and loss seem to play a very big part.

This time round, Jason and Helle are determined to make it to the happily ever after. Unfortunately, Sam Woolf will stop at nothing to crush them. That ride into the golden sunset seems awfully far away at times…

Smoke in Her Eyes by Anna Belfrage is a breathtakingly seductive, heartwrenching, and addictive romance fantasy thriller that had me gripping the edge of my seat and holding on to my heart. Every moment I spent with Helle, Jason, and even Sam was so achingly affecting and I loved it.

Anne Belfrage’s writing is incredibly intoxicating, beautiful and so riveting that I found myself dazzled and utterly entertained until the end. Reading this book is like going on an intense emotional rollercoaster and I felt all the wonderful highs and the painful lows. Every single emotion the characters felt, I did too and it’s both heartbreaking and amazing. There’s no denying that Belfrage is a talented and creative storyteller and I think her stories are hauntingly gorgeous, compelling, and atmospheric. I’m absolutely in love with this series and I cannot wait for Book #3 to come out.

Brimming with excruciating emotional turmoil, relationship drama, sexual tension, heartbreak, danger, and some wickedly steamy moments, this book exceeded all my expectations and even surprised me. The plot is absolutely thrilling, deliciously seductive, utterly captivating, and so incredibly entertaining. I definitely felt my heart beating faster never really knowing what would happen next and often breaking into a million pieces not just for Jason and Helle, but also at times for Sam. I know Sam is the antagonist, but there’s a part of me that bleeds for him and is hoping that maybe, just maybe there’s some light left in his soul. These characters have affected me in ways I never expected and I want them to all get their happily ever after. I really love how everything played out in this book and even though some moments were difficult to read, I enjoyed all the different emotions, joy and even the anguish that I felt while reading this unique romance story.

I think the characters in this series are well-written, multifaceted, and surprising. They made me feel so much and I honestly really care about them all in some way. Belfrage created such amazing characters you’ll love, adore, admire, and sometimes even despise, but all of them will leave a lasting impression. I think they’re realistic, relatable, and fascinating individuals.

Sam is complicated and the perfect villain you want to hate, but you can’t… at least not completely. He’s cruel, vicious, and vengeful, He’s obsessive, filled with so much anger, and has felt so much pain from being rejected by Helle. I know I should want him to suffer and not have a happy ending, but he’s also very human. His emotions are very real and I could feel just how badly he hurts that all he knows to do is be angry, ruthless, and hateful. I don’t hate him, but I also don’t like him. My heart is just so torn when it comes to Sam. I really don’t approve of what he’s doing, but I do see a little glimpse of his suffering and I just can’t help but feel for him. I’m still hoping that somehow everyone, including Sam, will have an ending they deserve and maybe…just maybe Sam will change in the next book.

I wasn’t too fond of Jason… at least not for the first half or so of the story. I won’t get into why or what happens, but I really didn’t like him for quite a while. I understood why and I felt bad for what he’s dealing with, but at the same time I just expected more from him. He does eventually win me over again and when I think back and really try to put myself in his situation, I get it. He wants to do right by the people he loves and I do admire that about him. He’s very passionate, honest, and is willing to do whatever it takes to protect Helle and anyone he cares about. He still makes mistakes… he is human afterall.

Helle is such a strong, relatable, and amazing heroine. I feel like I was there with her experiencing everything she’s going through. She’s far from perfect, and just like Jason, I think her reactions are very human. I was definitely on her side and I understood her feelings of rejection and insecurity. It broke my heart to see her fall apart, but also I admire that she knows what she deserves, speaks whatever is on her mind, and isn’t afraid to show her true feelings. Her emotional and personal journey in this book made me feel so much and I cannot wait to see what Belfrage has in store for her in Book #3.

A poignant, gripping, and beautifully written story of love, passion, revenge, obsession, forgiveness, and hope, Smoke in Her Eyes by Anna Belfrage is an exhilarating fantasy romance that will grab you and never let go. It’s enchanting, thrilling, twisted, sexy, romantic, and absolutely exquisite!

I received a free copy of this book from the author for participating in a blog tour hosted by TLC Book Tours in exchange for an honest review. All thoughts and opinions are my own. 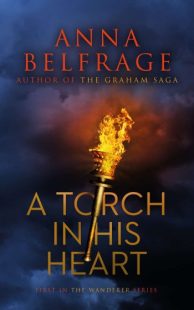 In the long lost ancient past, two men fought over the girl with eyes like the Bosporus under a summer sky. It ended badly. She died. They died.

Since then, they have all tumbled through time, reborn over and over again. Now they are all here, in the same place, the same time and what began so long ago must finally come to an end.

Ask Helle Madsen what she thinks about reincarnation and she’ll laugh in your face. Besides, Helle has other stuff to handle, what with her new, exciting job in London and her drop-dead but seriously sinister boss, Sam Woolf. And then one day Jason Morris walks into her life and despite never having clapped eyes on him before, she recognises him immediately. Very weird. Even more weird is the fact that Sam and Jason clearly hate each other’s guts. Helle’s life is about to become extremely complicated and far too exciting.

Monday, September 16th: What is That Book About – author guest post

Had Anna been allowed to choose, she’d have become a professional time-traveller. As such a profession does not exist, she settled for second best and became a financial professional with two absorbing interests, namely history and writing. These days, Anna combines an exciting day-job with a large family and her writing endeavours. Plus she always finds the time to try out new recipes, chase down obscure rose bushes and initiate a home renovation scheme or two.

Her most recent release, A Torch in His Heart, is a step out of her comfort zone. Having previously published historical fiction & historical romance, with this first book about Jason and Helle Anna offers a dark and titillating contemporary romance, complete with a time-slip angle and hot & steamy scenes.

I hope you enjoyed reading this post and get to meet Jason, Helle and Sam! Don’t forget to check out the rest of the tour and add this book on your TBR.

Have you read this book? What did you think? Share your thoughts in the comments down below.