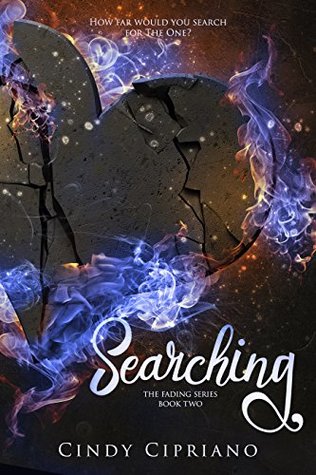 A fast-paced fantasy romance with rich characters and immersive storytelling,Searching is the second book in theFading series by award-winning author Cindy Cipriano.

To say Leath is traveling light is an understatement. She’s only bringing three things on her trip. One is a silver heart locket—a gift from her longtime best-friend-turned-boyfriend Victor Santana. Next is a wedding token in the shape of a J, from James Turner. And of course, she’s packing her pistol. That’s it. She knows that when she leaves Woodvine, even her own mother may not remember her in the shifted reality that will be left behind. Bringing anything else would be pointless. But she’s driven now, by something that eclipses everything else, something she just got back: her memories. And now that she remembers James—she won’t stop searching until she finds him. 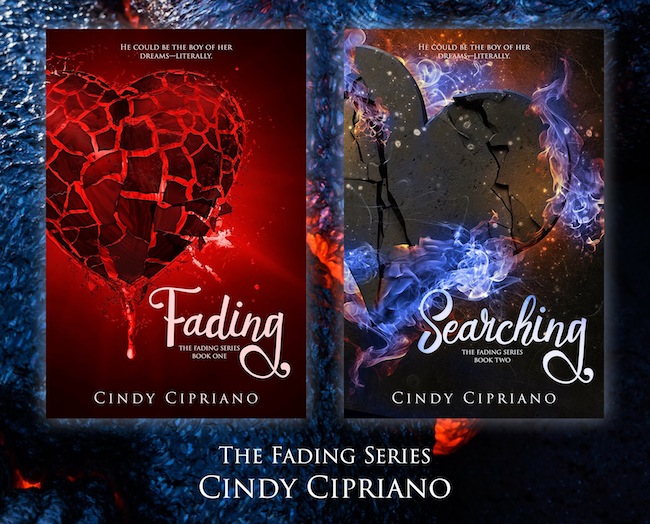 How far would you search for The One?

Leath is packing light: just her two lockets (one from Victor, one from James) – and of course, her pistol. She knows that when she leaves Woodvine, even her own mother may not remember her in the shifted reality that will be left behind. But she’s driven by something that eclipses everything else: her recovered memories. Now that she remembers James—she won’t stop searching until she finds him.

Where did the idea come from for Searching?

Searching is the second book in The Fading Series. Searching takes up immediately where Fading left off, just as Leath puts her foot down inside Judaculla.

What genre is Searching?

But – the entire series crosses genres. It’s a paranormal, dystopian, young adult romance mash-up. Searching is also a crossover, appealing to young adults and up.

Who would enjoy reading Searching?

Fans of Fading who are waiting to find out if it’s Victor or James.

And, anyone who has ever been in love with two people at the same time. 

James is sort of a two-sides-to-one-coin kind of guy. Was it difficult writing his character?

Definitely, but so worth it!

He’s drop-dead gorgeous and funny, but he hovers over dark territory. It was a challenge writing him because I wanted my readers to see what Leath sees in James. In Searching, fans will see just how deep James’s feelings for Leath go.

And Leath’s other love interest, Victor, was it hard to write him?

Victor is the definition of the perfect guy. He’s good-looking, funny, confident and charismatic. Not to mention he has an exceptionally beautiful heart.

Who is your favorite character in Searching?

Ever continues to be my favorite character. She’s the girl you love to hate. I think we’re all hoping that in the end, she’ll do the right thing. The problem is we lose a faith in her each time she opens her mouth. As I continue writing the series, I’m currently working on book three and James is fast becoming a close second to Ever as my favorite character. I think readers will enjoy watching James’s growth from Fading to Searching to where I am now in writing the series.

Who designed the cover of Searching?

How many books are in the Searching series? There will be at least 4 books in the series.

How can readers keep up with you and the Fading series?

Anything and everything about The Fading Series can be found at Clean Teen Publishing or CindyCipriano.com. 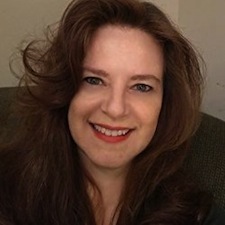 Cindy Cipriano lives in North Carolina with her husband, son and their 27 pets.

Cindy’s first novel, The Circle, Book One of The Sidhe won the 2014 Moonbeam Children’s Book Silver Award for Pre-Teen Fiction – Fantasy. Other titles in the series include The Choice, Book Two of The Sidhe (2015) and The Lost, Book Three of The Sidhe (2017). This seven-book series is published by Odyssey Books.

Miller’s Island Mysteries #1 The Case of the Toxic River (2017) is the first in her eleven-book science mystery series (Vulpine Press). #2 The Case of the Catalyst will release in 2018.

Look for Fading, the first in her young adult series, in April 2018. (Clean Teen Publishing). Fading is the tale of first loves and the consequence of dreaming up Mr. Right.

Between Frost and Fury by Chani Lynn Feener

Delaney has been kidnapped by aliens. Again. After only a month back on Earth with her hotnew alien boyfriend Ruckus, the deadly and devastatingly handsome prince Trystan has dragged her right back to his planet.

While some girls may dream of winning a prince’s heart, Delaney just wishes this one would leave her alone. Instead, she finds herself at the center of both a tense political battle between two alien kingdoms and Trystan’s romantic attentions, both of which are absolutely ruining the life she’s built on Earth. Not to mention the fact that she’s about to be crowned queen of a planet she’s barely even visited. Just another day in life of an ordinary human girl.

I Am Still Alive by Kate Marshall

Cheryl Strayed’s Wild meets The Revenant in this heart-pounding story of survival and revenge in the unforgiving wilderness.

After
Jess is alone. Her cabin has burned to the ground. She knows if she doesn’t act fast, the cold will kill her before she has time to worry about food. But she is still alive–for now.

Before
Jess hadn’t seen her survivalist, off-the-grid dad in over a decade. But after a car crash killed her mother and left her injured, she was forced to move to his cabin in the remote Canadian wilderness. Just as Jess was beginning to get to know him, a secret from his past paid them a visit, leaving her father dead and Jess stranded.

After
With only her father’s dog for company, Jess must forage and hunt for food, build shelter, and keep herself warm. Some days it feels like the wild is out to destroy her, but she’s stronger than she ever imagined.

Jess will survive. She has to. She knows who killed her father…and she wants revenge.

The Naked Truth by Vi Keeland

It was just a typical Monday.

Until the big boss asked me to make the pitch for a prospective new client.

After two years on shaky ground at work because of my screw up, an opportunity to impress the senior partners was just what I needed.

Or so I thought…

Until I walked into the conference room and collided with the man I was supposed to pitch.

My coffee spilled, my files tumbled to the ground, and I almost lost my balance.

And that was the good part of my day.

Because the gorgeous man crouched down and looking at me like he wanted to eat me alive, was none other than my ex, Gray Westbrook.

A man who I’d only just begun to move on from.

A man who my heart despised—yet my body obviously still had other ideas about.

A man who was as charismatic and confident as he was sexy.

Somehow, I managed to make it through my presentation ignoring his intense stare.

Although it was impossible to ignore all the dirty things he whispered into my ear right after I was done.

But there was no way I was giving him another chance, especially now that he was a client
…was there?

The Serpent by Sarah Fine

One woman is in a world of otherworldly trouble—and she’s going to have to bet her life to save humankind.

Ernestine “Ernie” Terwilliger has put her dreams aside to look after her eccentric mother. Case in point: saving her from a mysterious stranger who’s just stormed the terrified woman’s antique store wearing a rattlesnake tattoo, leveling threats, and brandishing the weirdest deck of cards Ernie’s ever seen.

When Ernie grabs some of the cards and runs, she’s launched into a world she never knew existed—one her mother may know more about than she’s revealing. With a handful of stolen cards, Ernie has just been made an unwilling player in a game of good versus evil. But she’s not even playing with a full deck, and its original owner is more than happy to kill to get his cards back.

Suddenly Ernie’s matching wits and plays with the supernatural Immortal Dealers, who can raise empires, damn souls, and shape the world’s destiny. It’s up to Ernie to defeat the most brutal member of their order. And if her roguish new ally isn’t bluffing, he can help. The mystery is all in the cards, and to save her life—and humanity—Ernie had better learn how to deal.

In the last days of the world, the walls of Viyara are still falling, and the dead are rising faster than ever.

Juliet is trapped—ordered by Lord Ineo of the Mahyanai to sacrifice the remaining members of her family, the Catresou, to stave off the end of the world. Though they’re certain his plan is useless, Juliet and her former friend Runajo must comply with Lord Ineo’s wishes—unless they can discover a different, darker path to protecting Viyara.

Romeo is tortured: finally aware that his true love is alive, he is at once elated and devastated, for his actions led directly to the destruction of her clan. The only way to redemption is to offer his life to the Catresou to protect and support them . . . even if it means dying to do so.

When Romeo’s and Juliet’s paths converge once again, only a journey into Death will offer answers and the key to saving them all—but is it a journey either of them will survive?

Kenzie holds one truth above all: the company is everything.

As a citizen of Omnistellar Concepts, the most powerful corporation in the solar system, Kenzie has trained her entire life for one goal: to become an elite guard on Sanctuary, Omnistellar’s space prison for superpowered teens too dangerous for Earth. As a junior guard, she’s excited to prove herself to her company—and that means sacrificing anything that won’t propel her forward.

But then a routine drill goes sideways and Kenzie is taken hostage by rioting prisoners.

At first, she’s confident her commanding officer—who also happens to be her mother—will stop at nothing to secure her freedom. Yet it soon becomes clear that her mother is more concerned with sticking to Omnistellar protocol than she is with getting Kenzie out safely.

As Kenzie forms her own plan to escape, she doesn’t realize there’s a more sinister threat looming, something ancient and evil that has clawed its way into Sanctuary from the vacuum of space. And Kenzie might have to team up with her captors to survive—all while beginning to suspect there’s a darker side to the Omnistellar she knows.

Perfect for fans of Madeleine Roux, Jonathan Maberry, and horror films like 28 Days Later and Resident Evil, this pulse-pounding, hair-raising, utterly terrifying novel is the first in a duology from the critically acclaimed author of the Taken trilogy.

After receiving a distress call from a drill team on a distant planet, a skeleton crew is sent into deep space to perform a standard search-and-rescue mission.

When they arrive, they find the planet littered with the remains of the project—including its members’ dead bodies. As they try to piece together what could have possibly decimated an entire project, they discover that some things are best left buried—and some monsters are only too ready to awaken.

So many beauties released and all being added on my TBR!

Have you read any of these? Which one are you most excited about. Let me know in the comments.

Thanks for stopping by and have a fantastic day loves!!!