Hello lovely swoonies! Today, I have my review for Love, Music, Madness by Tabitha Rhys. This is her debut novel and I think it’s a wonderfully well-written story and I hope you get the chance to read it.

Songwriting partners Lawson Harper and Jessa Warlow’s musical ambitions are derailed when their so-called relationship ends disastrously. However, neither Lawson nor Jessa are willing to give up on the album’s worth of soul-searing songs they wrote together–songs they’re sure are good enough to change both their lives.

Will the chemistry that fuels their creativity drive them to make the record of a lifetime, or only to absolute madness?

Love, Music, Madness by Tabitha Rhys was a crazy twisty emotional ride. I can’t say I was completely in love with everything, but I thought Rhys penned an achingly well-written and riveting story.

There was something magnetic and magical about this book that kept me captivated. The emotional honesty and realness in the writing style, storyline, and characters made this such a compelling and intriguing read. I liked the pacing, the imagery, the settings, and the overall feel of the story. I thought Rhys created interesting characters that were realistic and relatable. They weren’t always likable, but their personalities, actions, and flaws were amazingly believable that they felt like real people to me. I also liked exploring Los Angeles and Hollywood through Lawson’s experiences and the musical aspects of the story. Although it seemed a bit rushed, I thought Rhys wrote a fantastic conclusion… one I did not see coming and in the end, I was incredibly delighted to have read this book.

I do have to say that I wasn’t completely sure about the romance for most of the story. Based on the cutesy cover and the synopsis, I was expecting this to be lovey dovey. Well, it surprisingly was not. I felt no chemistry, no swoons, nothing. It was frustrating and I honestly could care less about the love interests. I was into reading more about Lawson’s self-discovery and personal growth. But, after I finished the book and stopped to really think about everything that happened, I found myself appreciating the way Rhys portrayed love and romantic relationships. Sometimes love can be messy, confusing, complicated, unpredictable and even ugly. Life can be that way too. And that’s okay. You wouldn’t be really living life if you didn’t experience all the good and the bad that comes with it.

This book was quite messy… a beautiful mess that had me turning the pages. Love, Music, Madness was a wonderfully affecting story about falling in and out of love, making mistakes and learning from them, chasing your dreams and doing what truly makes you happy, and ultimately finding yourself in the midst of every unexpected twists and turns and all the madness. It was an interestingly emotional read and a great debut novel that surprised me quite a few times.

Would I recommned this book? Yes. Absolutely. I think there are so many amazing things about this story that many readers will enjoy.

I received a copy of this book for the author in exchange for a fair and honest review. All thoughts, feelings, and opinions are my own.

I put down my guitar mid-verse.

She scoffed. “Interrupting what? My mother made some really dry scones for breakfast and my father gave me a gift I already picked out at the store.”

“What about Christmas dinner?” I challenged.

“Around here, we leave it at breakfast. My dad’s working on a paper. I think my mother started the laundry. And here I am, with you, trying to write a record. I think it’s going pretty well, too. That song we just came up with is going to be our best. I can already tell.”

“Really?” I warmed with what felt like a compliment. “Then let’s keep going. I won’t interrupt again. I promise.”

But Jessa had already set her guitar back on its stand. “First, I think you should tell me what’s wrong. And what you’re really doing here.”

“I mean, why aren’t you at home, spending Christmas with your family?”

I hesitated. I wasn’t sure how much I wanted to admit, or how much Jessa really wanted to know. I considered telling her that my family “left it at breakfast” too, but I had never been a convincing liar.

Jessa cocked her chin. “Why on earth would he do that?”

I wasn’t sure I had arrived at a complete answer to that question. Still, the words came spilling out. “The way my mom relies on me—and how attached my sister is to me—I think it makes him jealous.” I felt my blood pressure rising. “I don’t know what he expects. I mean, I’m the one that takes care of them when he won’t.”

“What do you mean when you say take care of them?”

“Of course there’s more to it, like just being there and helping Allison with her homework, but I mean bills mostly. My dad doesn’t send my mom any money, and she hasn’t had anything from her publisher for almost a year.”

“So what are you living on?”

Jessa was unable to hide her surprise. “All three of you?”

Jessa reached for my hand, but I pulled it back.

I felt very strange. Sort of exposed. “Today was a terrible mistake,” I said, without really meaning to. “I shouldn’t have come here. It’s Christmas. It’s a major holiday.” I was just thinking out loud, but for some reason I couldn’t shut up. “I’m your guitarist—songwriting partner, if you want to be really generous—and I still show up on your doorstep unannounced. Then  I tell you all my problems like some angst-ridden teenager.”

“You can come over here whenever you want,” Jessa insisted. “On holidays, major and minor, and you can talk to me. About anything you want to.”

Jessa made another grab for my hand. Her fingers wound through mine. “I said it because I like you! I mean, I really like you. You’re smart, and very easy to be with. I wouldn’t want to sit around my bedroom for hours at a time with just anybody. No matter how good they were on the guitar.”

She narrowed her eyes. “We’re just getting to know each other and all, but I see good things coming, Lawson Harper.”I almost didn’t believe her. I hadn’t dared hope that Jessa Warlow would actually be into me.But there it was. She’d said it, clear as anything. Jessa “saw good things.” I was suddenly fighting a smile. Then a grin. Finally, I just gave in. Messed-up mouth be damned. 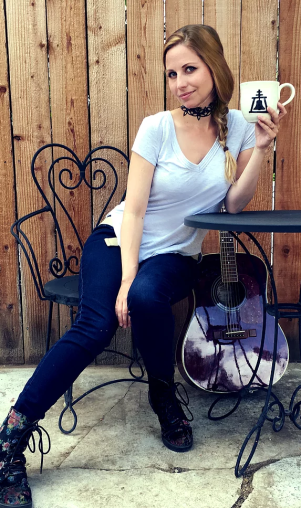 Tabitha Rhys is a writer with a passion for music, misfits, and subculture. Love, Music, Madness is her debut novel.

​Although entirely a work of fiction, Love, Music, Madness is inspired by Tabitha’s adventures on the road as an independent musician and in DIY studios during the rise of the digital recording revolution.

​Tabitha became entrenched in the independent music scene in the early 2000s when she moved from the Philadelphia suburbs to L.A.’s colorful Venice Beach. There, she joined a band despite owning only a starter keyboarder that a local soundman quickly dubbed “The Radio Shack.”

​After investing in some better gear, Tabitha went on to travel the West Coast, singing and playing keys and guitar. At varying times, she called Los Angeles, San Diego and Seattle home. At other times, home was the car or van she lived in while performing shows at the dive du jour.

​After roughly ten years, a mid-tour wreck ended Tabitha’s travels. With her gear destroyed, Tabitha canceled the rest of her scheduled shows and took a hiatus out in the desert. Holed up in a casita, she finally sorted through her notes from the road and the many stories she’d written over the years. Together, they became Love, Music, Madness.

​Currently, Tabitha resides in Riverside, CA with her husband and favorite little wild child, her toddler son. She is excited for the upcoming release of the print edition of her book and busy writing her next novel.

Thanks for stopping by and I really hope you enjoyed this post. Don’t forget to leave your thoughts and comments down below. I always love hearing from you.

Have a wonderful weekend!!!