Hello fellow book lovers and welcome to my Blog Tour Stop for Going Places by Kathryn Berla Hosted by Xpresso Book tours. Today, I have an Excerpt to share with you and giveaway at the end. So let’s get started! Everyone had high expectations for Hudson Wheeler. His fourth grade teacher even wrote to his parents that Hudson was “going places.” But everything went downhill after his father died on the battlefield of Iraq one year later. Now facing his senior year of high school without his two best friends by his side and with his teacher’s letter still haunting him, Hudson seizes homeschooling as an opportunity to retreat from the world.

What happens during this year will prove to be anything but a retreat, as Hudson experiences love and rejection for the first time and solves the painful mystery of the “girl in the window”—an apparition seen only by the WWII vet whose poignant plight forces Hudson out of the comfort zone of boyhood.

Going Places is a peek into what male adolescence looks like today for those who don’t follow traditional paths as they strive to find themselves.

The kitchen. A huge part of my life had played out there. Mom hated it because she didn’t have the money to update it. She claimed it taunted her every day of her life. Puke-yellow Formica counters; the rust countertop footprint of a can of baked beans; the floor that was supposed to look like a tile floor but was really just a sheet of vinyl curling up at the corners; the cabinets that never closed all the way; fluorescent lights that buzzed, flickered, and hummed like crazy; and the refrigerator hummed too. And rocked like it was about to fall on top of you when-ever you opened it.

Taped to the refrigerator was a note. The one my fifth grade teacher sent to my parents. The one Mom refused to let me take down even after all this time. The one that taunted me every day the same way the kitchen taunted her.

It isn’t every day I’m motivated to write a letter like this, so I want the two of you to know just how meaningful this is. Hudson is one of those students who comes along very rarely, so I consider myself blessed to have had him in my class this year. When it comes to good citizenry, he has no peer, always ready to lend a helping hand. Hudson is extremely well-liked by both faculty and the student body. He is motivated, helpful, thinks creatively and unself-ishly. You’ve succeeded admirably in your job of parenting to have produced such a fine young man. It’s obvious to me that Hudson is going places!

I memorized the letter, that’s how many times I’ve read it. Every time I opened the refrigerator in the last eight years looking for something to eat (at least ten times a day), there it was. Technically it should have been addressed to Major and Mrs. Wheeler because that’s what Dad was, a Major in the army. But he never saw the letter. A month after Mrs. Thompson mailed it to my house, my dad was killed in Iraq. I was the student body president that year and believed what Mrs. Thompson said. I wasn’t sure exactly where I was going, but I knew it would be somewhere big. Somewhere that would make me happy and make my parents proud, and I didn’t mean just middle school.

But after Dad died, we went through our sad years where I sometimes had to act more grown-up than I was just to help Mom get through the day. After that, where I was going didn’t seem so important anymore. We got through the sadness, of course. But the letter that used to feel like a promise began to feel like a dare. And there I was trying to disappear from school altogether. What would Mrs. Thompson think if she knew what I was doing? 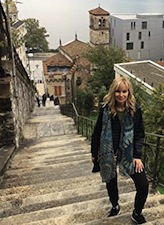 Kathryn Berla likes to write in a variety of genres including light fantasy, contemporary literary fiction, and even horror. She is the author of the young adult novels: 12 Hours in Paradise, Dream Me, The House at 758, and Going Places. The Kitty Committee is her first novel written for adult readers.

Kathryn grew up in India, Syria, Europe, and Africa. Her love for experiencing new cultures runs deep, and she gives into it whenever she can. She has been an avid movie buff since childhood, and often sees the movie in her head before she writes the book.

Kathryn graduated from the University of California in Berkeley with a degree in English. She lives in the San Francisco Bay Area.

Thanks for stopping by and as always, have a wonderful day!!