Happy Wednesday lovelies!! I hope you’re having a wonderful week so far.

Let’s check out what I picked for today’s  Waiting on Wednesday, which is a weekly event, hosted by Jill at Breaking the Spine that spotlights upcoming releases that we’re eagerly anticipating. A similar meme, Can’t-Wait Wednesday, is hosted by Tressa over at Wishful Endings. If you’d like to participate in either one, don’t forget to link back to these lovely ladies and add your links in their posts. 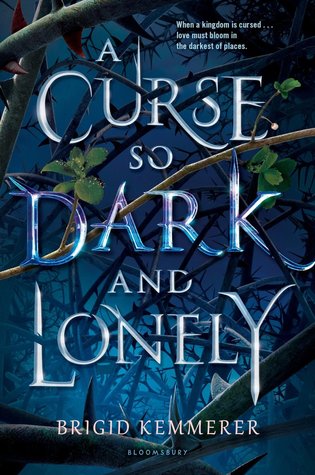 Fall in love, break the curse.

It once seemed so easy to Prince Rhen, the heir to Emberfall. Cursed by a powerful enchantress to repeat the autumn of his eighteenth year over and over, he knew he could be saved if a girl fell for him. But that was before he learned that at the end of each autumn, he would turn into a vicious beast hell-bent on destruction. That was before he destroyed his castle, his family, and every last shred of hope.

Nothing has ever been easy for Harper Lacy. With her father long gone, her mother dying, and her brother barely holding their family together while constantly underestimating her because of her cerebral palsy, she learned to be tough enough to survive. But when she tries to save someone else on the streets of Washington, DC, she’s instead somehow sucked into Rhen’s cursed world.

Break the curse, save the kingdom.

A prince? A monster? A curse? Harper doesn’t know where she is or what to believe. But as she spends time with Rhen in this enchanted land, she begins to understand what’s at stake. And as Rhen realizes Harper is not just another girl to charm, his hope comes flooding back. But powerful forces are standing against Emberfall . . . and it will take more than a broken curse to save Harper, Rhen, and his people from utter ruin.

Sunlight gilds the fixtures in my sitting room, throwing shadows along the hand-sewn tapestries and the velvet chairs my parents once occupied. Sometimes, if I sit here long enough, I can imagine their presence. I can hear my father’s brusque voice, full of admonishment and lectures. My mother’s quiet disapproval.

I can remember my own arrogance.

I want to walk out of the castle and fling myself off a cliff.

That doesn’t work. I’ve tried. More than once.

I always wake here, in this room, waiting in the sunlight. The fire always burns low, just as it is now, the flames crackling in a familiar pattern. The stone floor appears freshly swept, wine and goblets sitting ready on a side table. Grey’s weapons hang on the opposite chair, waiting for his return.

Everything is always the same.

Except for the dead. They never come back.

The fire pops, a bit of kindling sliding to the base of the fireplace. Right on schedule. Grey will reappear soon.

I sigh. Practiced words wait on my tongue, though sometimes it takes the girls a while to awaken from the sleeping ether Grey gives them. They’re always frightened at first, but I’ve learned how to ease their fears, to charm and coax them into trusting me.

Only to destroy that trust when autumn slides into winter. When they see me change.

The air flickers, and I straighten. As much as I hate the curse, the never-ending repetition of my life here, the girls are the one spot of change. Despite myself, I’m curious to see what motionless beauty will hang in Grey’s arms today.

But when Grey appears, he’s pinning a girl to the floor.

She’s not a motionless beauty. She’s scrawny and shoeless and digging her nails into the side of his neck.

Grey swears and knocks her hand away. Blood appears in lines across his throat.

I rise from the chair, nearly losing a moment to the sheer novelty of it all. “Commander! Release her.”

He flings himself back and finds his feet. The girl scrambles away from him, clutching a rusted weapon of some sort. Her movement is labored and clumsy.

“What is this?” She gets a hand on the wall and staggers to her feet. “What did you do?”

Grey grabs his sword from the chair, pulling it free from the scabbard with a fierceness I haven’t seen in … in ages. “Have no worries, my lord. This may be the shortest season yet.”

The girl raises the rusted bar as if that will provide any kind of defense against a trained swordsman. Dark curls spill out of the hood of her clothing, and her face is tired, drawn, and dusty. I wonder if Grey injured her, the way she keeps her weight off her left leg.

“Try it.” She glances between him and me. “I know a good spot I haven’t hit with this yet.”

“I will.” Grey lifts his weapon and steps forward. “I know a good spot I haven’t hit with this yet.”

“Enough.” I’ve never seen Grey go after one of the girls, but when he shows no intention of stopping, I sharpen my tone. “That is an order, Commander.”

He stops, but his sword remains in his hand and he doesn’t take his eyes off the girl. “Do not think,” he tells her, his voice fierce, “that this means I will allow you to attack me again.”

“She attacked you?” My eyebrows rise. “Grey. She is half your size.”

“She makes up for it in temperament. She most assuredly was not my first choice.”

“Where am I?” The girl’s eyes keep flicking from me to him to the sword in his hand—and then to the doorway behind us. Her knuckles are white where they grip the bar. “What did you do?”

I glance at Grey and lower my voice. “Put up your sword. You’re frightening her.”

The Royal Guard is trained to obey without hesitation and Grey is no exception. He slides his weapon into its sheath, but strings the sword belt around his waist.

I cannot remember the last time he was fully armed on the first day of the season. Probably not since there were men to command and threats to deflect.

But removing the weapon has drained some of the tension from the room. I put out a hand and keep my voice gentle, the way I speak to skittish horses in the stables. “You are safe here. May I have your weapon?”

Her eyes slide to Grey, to where his hand remains on the hilt of his sword. “No way.”

“You fear Grey? Easily solved.” I look at him. “Commander. You are ordered to not harm this girl.”

He takes a step back and folds his arms.

The girl watches this exchange and then she draws a long breath and takes a tentative step forward, the bar held in front of her.

At least she can be tamed as easily as the others. I extend my hand and give her an encouraging look.

She takes another step—but then her expression shifts, her eyes darken, and she swings.

Hard steel slams into my waist, just below my rib cage. Silver hell, it hurts. I double over and barely have time to react before she’s swinging for my head.

Luckily, my training is nearly as thorough as Grey’s. I duck and catch the bar before she makes contact.

Now I understand why Grey grabbed his sword.

Her eyes flare, burning with defiance. I jerk her forward, ready to wrestle the bar out of her grasp.

Instead, she lets go suddenly, forcing me to fall back. She stumbles toward the doorway, limping into the hallway, her breathing ragged.

I let her go. The iron bar drops to the carpet and I press a hand to my side.

Grey hasn’t moved. He’s standing there with folded arms. “Do you still wish for me to leave her unharmed?”

There was a time when he wouldn’t have dared to question me.

There was a time when I might have cared.

I sigh, then wince as my lungs expand into the already-forming bruise on my side. What began as a novelty now simply hurts. If she fights to run so fiercely now, there is little hope for later.

The shadows have shifted a bit, tracing their familiar path. I’ve watched it hundreds of times.

When this season ends in failure, I’ll watch it again.

“She is injured,” says Grey. “She cannot get far.”

He is right. I am wasting time.

As if I don’t have time in spades.

This book sounds stunning and magically fascinating. I love Retellings so I’m definitely really excited for this.

What are your thoughts on this book? What’s on your Waiting on Wednesday pick today? Leave your links on the comments below so I can check out your post and find more books to add on my TBR!

As always, thanks for stopping by and have a great day!!!