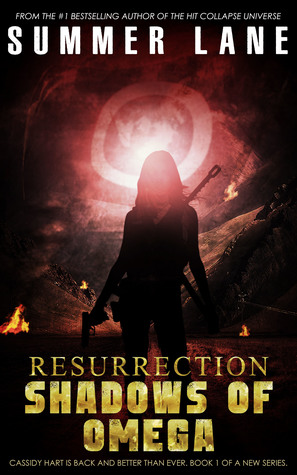 The war is over. At last, Omega has been defeated, and the militias have found peace and stability. General Cassidy Hart has been elected to lead the newly resurrected post-apocalyptic government as President of the Western Republic.

The world is a different place. From the ashes, structure emerges. From death, hope blossoms.

Yet the shadows of Omega remain. Omega loyalists and dangerous anarchists infect every level of the crestfallen civilization, threatening to undermine the Republic’s attempts to maintain peace. Most of the world’s population has been slain: those who remain alive have very different ideas about what must be done to continue to survive.

A seasoned war veteran, sniper, and leader, Cassidy resents the stifling role of presidential leadership. General Chris Young, her former fiancé, leads the United Militia’s military as it rebuilds. Her comrades from war have scattered, and the one person who understands her, truly and completely, has disappeared.

When a new threat emerges, one that could undo everything they have fought for, Cassidy is forced to make hard decisions and ask for help in places where she never imagined she could.

The old is gone. The new has come.

The Resurrection has begun.

From prolific author Summer Lane, creator of the #1 bestselling smash-hit Collapse Series, Zero Trilogy, Bravo Saga, Unbreakable SEAL and Running with Wolves. Enjoy this new series, following the adventures of beloved heroine Cassidy Hart, along with some familiar faces that fans have come to know and love.

The chopper takes a sharp right turn, and then we are turning back across the island, toward the eastern side. I peer out the window, retracing our flight pattern in my head, glancing sideways at the three men beside me. They are unfazed by the sudden change in direction. I glance up toward the cockpit. Something uneasy stirs inside me, but I push the feeling away.

I am safe with these men. If the pilot is altering course, it’s purely because there is a change in the weather pattern. He will get me to where I need to go.

There are a lot of people who would like to see you dead.

I curse myself, and then I shout,

“Hey, why are we turning?”
The man beside me replies, “The pilot knows what he’s doing, ma’am.”

“Our flight pattern was very clear. We shouldn’t be altering course.”

I reach toward the earpiece in my ear, intending to key into the pilot’s headset and inquire directly about our change in course. The man beside me places his hand on my wrist.

I glance at his face. It’s hard to read his expression—stony, direct. I push his hand away.

I raise my hand again, and this time, he grabs my wrist and shoves my arm behind my back. It happens in the span of a single breath—fast, fluid, and efficient. Unfortunately for him, I am equally as fast. One year on the road as president has not even slightly dulled my reflexes or instincts. I immediately take in three things about him: One, his patch reads Douglas. Two, he’s at least two hundred and fifty pounds. Three, he’s trying to break my arm.

I use my right hand to grab the knife in my boot and swing it around. I slash the right side of his cheek open and he screams. Hot blood gushes from his face. I realize in this moment that the other two men in the chopper have risen from their seats. At first, I think they are coming to my assistance.

One has his handgun drawn. I unbuckle my harness.

Adrenaline. Here it comes. The supercharged rush, the inhuman strength. It flashes through my body, giving me speed and finesse I have not experienced since I took on the mantle of the presidency.

This is both the launch of a new series and your 20th bestselling novel in 5 years. How does that feel?

To be honest, it feels like it’s been about 15 years. I can’t believe it’s only been 5 years since I started writing Cassidy’s story for readers around the world. We’ve come so far! I feel accomplished, satisfied, and excited. I’m looking forward to working on this new series over the next few years. Cassidy Hart is near and dear to my heart, and I’m thrilled that her stories are enjoyed by so many people.

How is Resurrection different from Collapse?

In Collapse, the story is about militia groups and average people rising up and becoming soldiers, warriors, and leaders. It’s about Cassidy Hart growing from a naïve but good-hearted teenage girl, into a battered war veteran and military leader. In Resurrection, we get to examine the aftermath of the global war and see Cassidy begin the story as a confident, mature, and badass woman. We get to see a new type of threat to our heroes. This book is slicker, faster, grittier, maybe a little darker. I totally love it, because Cassidy Hart is finally exactly where I want her to be: in charge and in control.

First of all, it’s my job, so I have a very efficient system and structure for creating my novels. Second, I enjoy writing, so that makes it a little easier. Third, I’m a fast writer by nature. Some people take more time with their manuscripts, but I find that I do my best work when I just get it out. I’m actually slightly astonished, too, that I’ve managed to produce so much in such a short amount of time and have each one be a success. I’m so lucky to have such amazing readers – and copious amounts of coffee!

What’s the plan for your upcoming books?

I plan to keep the Resurrection Series similar to Collapse in that you can expect 2 releases a year from Cassidy Hart. At this point, I know that there will be at least 6 novels in the set. As for my other projects, I can’t announce anything yet, but I am working on some fun storylines on the side in what scant free time I have, haha.

Summer owns Writing Belle Publishing (a management company) and Writing Belle (an online magazine). She is an experienced journalist and writing instructor.

Summer lives in California with her husband, Scott, and their German Shepherd, Kona. She is an avid adventurer, animal lover, and coffee addict.

You can visit her at her website, summerlaneauthor.com, for new and upcoming book release information. To stay up to date on current titles and events, follow @writingbelle on Instagram, or @SummerEllenLane on Twitter. You may also check out Summer Lane on Facebook.