Don’t Forget Me by Victoria Stevens

Seventeen-year-old Hazel Clarke is no stranger to heartbreaks, and being sent to live with a father she’s never met is the latest in a string of them. Even the beauty of eastern Australia isn’t enough to take her mind off her mother and the life she had to leave behind in England. But when Hazel meets the friendly, kindhearted Red and his elusive twin, Luca, she begins the slow process of piecing together a new life—and realizes she isn’t the only one struggling with loss. As friendships deepen and love finds its way in, Hazel also learns that when you truly love someone, they are always in your heart.

This sparkling debut novel is a touching testament to coming of age, falling in love, and finding home in unexpected places.

The Traitor’s Prince by C.J. Redwine

Javan Najafai, crown prince of Akram, has spent the last ten years at an elite boarding school, far away from his kingdom. But his eagerly awaited return home is cut short when a mysterious imposter takes his place—and no one believes Javan is the true prince.

After barely escaping the imposter’s assassins, Javan is thrown into Maqbara, the kingdom’s most dangerous prison. The only way to gain an audience with the king — and reveal Javan’s identity — is to fight in Maqbara’s yearly tournament. But winning is much harder than acing competitions at school, and soon Javan finds himself beset not just by the terrifying creatures in the arena, but also a band of prisoners allied against him, and even the warden herself.

The only person who can help him is Sajda, who has been enslaved by Maqbara’s warden since she was a child, and whose guarded demeanor and powerful right hook keep the prisoners in check. Working with Sajda might be the only way Javan can escape alive — but she has dangerous secrets.

Together, Javan and Sajda have to outwit the vicious warden, outfight the deadly creatures, and outlast the murderous prisoners intent on killing Javan. If they fail, they’ll be trapped in Maqbara for good—and the secret Sajda’s been hiding will bury them both.

When the Light Left Us by Leah Thomas 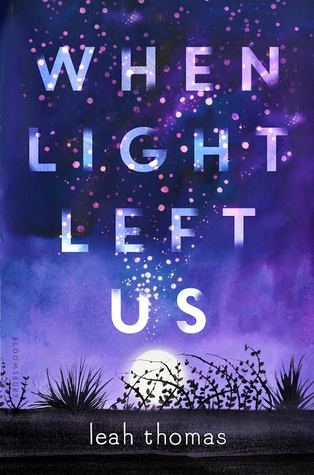 When the Vasquez siblings’ father left, it seemed nothing could remedy the absence in their lives . . . until a shimmering figure named Luz appeared in the canyon behind their house.

Luz filled the void. He shot hoops with seventeen-year-old Hank’s hands. He showed fourteen-year-old Ana cinematic beauty behind her eyelids. He spoke kindly to eight-year-old Milo. But then Luz left, too, and he took something from each of them. As a new school year begins, Ana, Hank, and Milo must carry on as if an alien presence never altered them. But how can they ever feel close to other people again when Luz changed everything about how they see the world and themselves?

In an imaginative and heartfelt exploration of human—and non-human—nature, Leah Thomas champions the unyielding bonds between family and true friends.

Danica planned to use beauty, blackmail, and a glittering drug to control her own fate. Her escape from the twisted world of the Palace of Versailles was perfectly orchestrated and paid for. Or so she thought.

Betrayed by the man who had promised her freedom, Dani is now married to the murderous King. It’s a terrifying position to be in…and yet it’s oddly intoxicating. Power may be an even stronger drug than Glitter–a drug Dani can’t resist, in the form of secrets, manipulation, and sabotage.

In her new position at the head of the court, Dani must ask herself who she really is. Can she use her newfound power to secure her real love, Saber’s freedom and a chance at a life together outside the palace? Or is being Queen too addictive to give up?

The Rogue Queen (The Hundredth Queen #3) 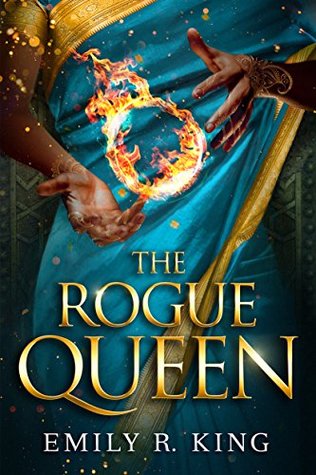 Despite the odds, Kalinda has survived it all: Marriage to a tyrant. Tournaments to the death. The forbidden power to rule fire. The icy touch of a demon.

That same demon now disguises itself as Rajah Tarek, Kalinda’s late husband and a man who has never stopped haunting her. Upon taking control of the palace and the army, the demon brands Kalinda and her companions as traitors to the empire. They flee across the sea, seeking haven in the Southern Isles.

In Lestari, Kalinda’s powers are not condemned, as they are in her land. Now free to use them to protect those she loves, Kalinda soon realizes that the demon has tainted her with a cold poison, rendering her fire uncontrollable. But the lack of control may be just what she needs to send the demon back to the darkest depths of the Void.

To take back the empire, Kalinda will ally with those she distrusts—and risk losing those most loyal to her—to defeat the demon and bring peace to a divided nation.

Sightwitch (The Witchlands 0.5) by Susan Dennard

Before Safi and Iseult battled a Bloodwitch…

Before Merik returned from the dead…

Ryber Fortiza was a Sightwitch Sister at a secluded convent, waiting to be called by her goddess into the depths of the mountain. There she would receive the gift of foretelling. But when that call never comes, Ryber finds herself the only Sister without the Sight.

Years pass and Ryber’s misfit pain becomes a dull ache, until one day, Sisters who already possess the Sight are summoned into the mountain, never to return. Soon enough, Ryber is the only Sister left. Now, it is up to her to save her Sisters, though she does not have the Sight—and though she does not know what might await her inside the mountain.

On her journey underground, she encounters a young captain named Kullen Ikray, who has no memory of who he is or how he got there. Together, the two journey ever deeper in search of answers, their road filled with horrors, and what they find at the end of that road will alter the fate of the Witchlands forever.

Set a year before Truthwitch, Sightwitch is a companion novella that also serves as a set up to Bloodwitch, as well as an expansion of the Witchlands world.