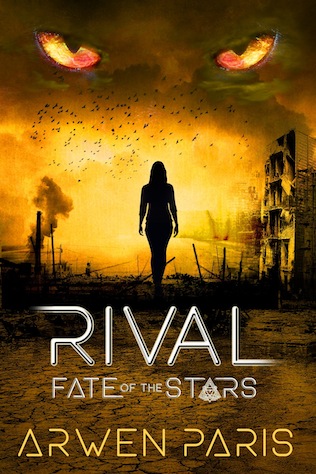 It’s a role she didn’t want…

One deadly week has passed since seventeen year old Allison Delaney realized she must save Earth from the parasitic race of Ma’tiok. But the task is even more complicated than Allison feared, and she’s being set up to fail. Blamed for a fatal blow to the Alliance fleet that killed dozens of soldiers, Allison must face judgment for their deaths. The High Priestess Kiobaan is Allison’s only hope. Kiobaan sees the warrior spirit in Allison, along with her potential both politically and physically and agrees to train her.

And a game she can’t afford to lose.

Meanwhile, though Allison is the human host of Eenoki, protector of life, she’s not yet ready to harness their combined energy. Their bond is unpredictable at best—volatile at worst. Time is running out for Eenoki and Allison to trust each other—all or nothing—or she’ll never gain the power she needs to defeat the Ma’tiok and save Earth. When Allison is marked for death by an unknown enemy, the High Priestess Kiobaan must step-up and fight. But in return Kiobaan extracts a pledge from Allison, one that will compromise her new status and make her a target.

Staring out of the tinted bulletproof windows of the limo, I can’t tell for sure how gray the clouds are that gather above us. I hope it doesn’t rain again. It’s unsettling to come back here. To see the complete destruction of the California ocean side town that I once called home—Avilene Beach. It’s a ghost-like cemetery of charred, crumbling homes and palm trees turned askew and broken apart. Just like me.

This is the direct result of my decisions.

Wind skitters across the surface of black puddles racing by, reminding me of the oily blood of the Ma’tiok. It’s been just one week since my old life, my human life, ended and this new one exploded into existence. Acid rises in the back of my throat, burning hot, and I crush my jaw together hard until my lips press into a thin line. Why did Eenoki pick me?

“Priestess, do you understand what I said?”

Katok’s sharp telepathic tone startles me out of my immersive guilt. “Stick to the speech the High Priestess provided. Yes. I got it.” I swallow hard against the rising bile being pressed there by the trembling in my gut. What if this press conference makes things worse?

“Allison, don’t worry so much. You’ll be safe.” Stephen reaches out to me and Katok snatches his hand midair, crushing it in his huge taloned palm.

I swear, that’s almost a smirk on the massive Vongjar commander’s leopard-like face. Katok’s lips curl back menacingly to reveal his white fangs and piercing resolve. Stephen knows better than to try and touch me.

I sigh, and can’t help but glare at Stephen who sits across from me. His dark muscular arms are crossed hard against his white Navy button up shirt. Even with the blotchy purple and yellow bruises healing across his tense neck and face, he’s still handsome. But his haircut, shaved in military style, makes me miss his longer tawny surfer hair.

“Stephen, if I can’t be the bridge between the Alliance and Earth, our world won’t survive the Ma’tiok. You understand that, right?”

His angry blue eyes lock on me, softening, and he smiles.

I look away and clench my fists on the cold, empty, black leather seats beside me. We can never make it work. He’ll never understand what I am, or what I have to do. I have to serve the Alliance to have any chance of getting them to fight the Ma’tiok on the ground, instead of glassing the Earth like they have so many other infected worlds.

The blue tint to the air thickens as we get closer to our destination. What if I had just gone with Z’iram and left Earth behind? Maybe he would have spared those who died here.

No. If we left, there would be no hope of the Alliance helping this world fight back. Any other choice would have meant the total destruction of Earth without any chance of survival.

I know Eenoki is right, but the truth still hurts.

The High Priestess will arrive soon, aboard the planet killer Star Fire, to judge and test me. This speech is another test, one that I can’t afford to mess up. If Kiobaan doesn’t publicly declare me a Priestess, of Earth, then there will be no ambassador to the Alliance or protection for our world.

I take a deep breath and straighten the pale gown Tarem made me wear, irritated at how ridiculous I look. Not that I own any clothes besides what the Alliance has provided me. Before we left, my reflection shocked me. The way they pinned up my long auburn waves under a small crystalline hairpiece that stands a few inches high, reminded me of my vision of Aakina. The memory Eenoki shared with me from her last day alive, before she and her world were wiped out by the Ma’tiok.

“How much longer Katok, until there are too many Ma’tiok for your troops to handle”

His golden eyes widen. “They multiply too quick. The ground troops struggle to do more than contain them. Our current calculations project ten Earth days at most. We need Alliance support to do any more.” Katok shakes his head.

Ten days left? It’s only been twenty one since the Ma’tiok arrived!

Stephen leans closer. “He’s not telling you the whole story. Admiral Hurst says that there are over ten thousand Ma’tiok and infected humans on the ground, and that combined kills between Katok’s troops and the US military don’t even equal the rate that they’re multiplying at. We are losing every day.”

Arwen Paris is the author of young adult fiction. Her debut YA Sci-fi Urban Fantasy novel FATE OF THE STARS releases September 1, 2017. The actions packed pages of her novels are filled with characters that are forced to face fears they never expected. When she’s not writing, you can see posts of her (too many) vacations that keep her sane. Arwen lives in Washington, has a big crazy family & after the day job, she writes Fiction For the Fearless – #F3Fanatic